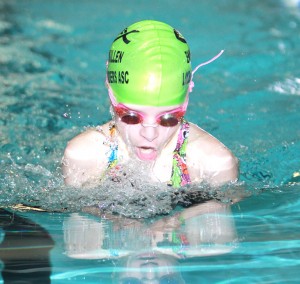 Ellie McCartney cuts through the water at Liverpool.

The annual competition was a Level 1 standard and was held at the 50m Liverpool Aquatics Centre at Wavertree. Medals were awarded to all age groups from 9 years old to 14 years old and 15 & over. Almost 20 teams competed.

The Fermanagh contingent, Niamh O’Kane, Ellie McCartney and their families, were made most welcome over the two days and while the competition was important the priority was for the two swimmers to gain valuable high level Long Course experience and to have fun.

Ellie McCartney, aged 9, had to achieve 10 year old qualifying times for the events she had entered – seven in total. The Saturday morning event for Ellie was the 400m freestyle which she had never contested in a 50m pool before but still managed a fantastic personal best to win a gold medal in her age group.

Ellie swam a fantastic 100m breaststroke in a time of 1:31.85 to win her fifth Gold, which would have also given her a medal in the 10-year-old and 11-year-old age groups. Sunday afternoon saw the toughest two races for Ellie, the 200m individual medley followed by the 400m individual medley. After five competitive events over the gala Ellie was able to produce two new Personal Bests, Irish Age Group (IAG) Division 2 times and win gold in both events leaving her with seven gold medals from seven events.

On Saturday morning in her first of her four weekend events, Niamh O’Kane achieved a new personal best and narrowly missed out on a top 10 place in the 100m backstroke. She followed that up in her second and third events with two IAG Division 2 times in the 100 butterfly where she had an eighth place finish and also in the 100 freestyle, in a time of 1:15.4.

On Sunday afternoon, .6 of a second separated her from achieving her third IAG Division 2 qualifying time of the weekend in the 200m freestyle when she completed it in a time of 2:47.26 but with 2 Division two qualifying times under her belt she was more than happy with her weekend’s work.