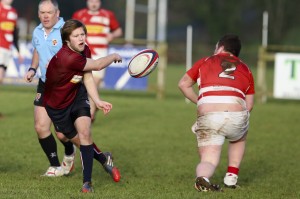 Patrick McCleery sweeps the ball away from the scrum.

Built upon a dominant scrum and an impressive first half display Enniskillen marched into the second round of the Towns Cup with a resounding 34-8 victory over Randalstown at Mullaghmeen on Saturday.

The home side made amends for a defeat earlier in the season and now move on to the next round, hopeful of going one better than their impressive Junior Cup semi-final run.

On a brisk, but dry Saturday afternoon it was a slow start as both sides tested the opposing defences.

After good breaks from captain Jamie Johnston and full back Ashley Finlay out half Nick Finlay opened the scoring with a penalty from the 22.

From then on Skins began to exert their physical dominance over the visitors, with their superb scrum driving the Randalstown eight backwards. On 13 minutes from another powerful scrum close to the visitor’s line the ball went blind to left winger Zach Charlton for the opening try. Finlay was unable to add the extras from the touchline.

Despite again putting pressure on the Randalstown defence, the visitors were able to reply with a penalty to leave the score 8-3 after 20 minutes.
After strong running from Alan Wilkinson and superb tactical kicking from Nick Finlay keeping the visitors in their own half Skins registered the next score. The ball was taken against the head after another monumental scrum and number eight Jamie Johnston registered his first score of the day from close range, with Finlay adding the conversion.

Things went from bad to worse for the visitors as another powerful scrum drove the Randalstown eight over 10 metres in reverse and after more astute tactical kicking an attacking scrum five metres out yielded a push-over try for Johnston. The conversion left it 22 – 3 at half time with the visitors well and truly in charge.

The second half began with Skins again in the driving seat. After building pressure close to the Randalstown line in the opening five minutes a quick tap from Nick Finlay caught the visiting defence napping resulting in the fourth try of the day. With Finlay adding the conversion to his own try the 29-3 scoreline meant no way back for Randalstown.

To their credit however the visitors fought valiantly and had much the better of the second half, with their impressive number 12 prominent throughout. They were rewarded for their play when after some enterprising rugby the ball was swept through the hands before being finished superbly by the right winger, riding two challenges to touch down, leaving the score 29-8.

It was a scrappy final quarter and in truth the visitors deserved more for their efforts, but this wasn’t their day. In the 75th minute a scrum in the Skins 22 was disrupted and flanker Jack Harte kicked the ball clear. After a great chase by Donagh O’Callaghan that man Johnston was on hand to collect the ball and run in for a superb hat trick, leaving the final score 34 – 8.

Skins coach Norman Richmond was delighted with the effort from his players.

“I was very pleased with our performance on Saturday,” said Richmond. “We played intelligent rugby and kept Randalstown pinned back. Our forwards dominated up front securing good ball and good field kicking from Nicky Finlay rewarded a hard working pack with good field position. There was good movement of the ball and we were able to punish Randalstown. It’s always good to get through the first round of what is a tough competition within Ulster rugby, what or who comes next we will just have to wait and see, but I believe this team can give a good account of themselves.”