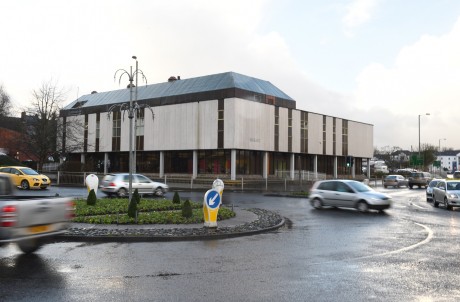 FUTURE cuts to libraries in Fermanagh have not been ruled out, Libraries NI has said this week.

Enniskillen library has had both staff and opening hours cut in recent months – while questions over the impact of cuts on Lisnaskea’s new £1.5m library, due to open at the beginning of this year, remain.

Libraries NI told the Fermanagh Herald that they have £1.4m of worth of cuts to make across the North, and said that there is an ongoing review of budgets heading into 2015 – which could impact onthe county’s three libraries: Enniskillen, Irvinestown, and when completed, Lisnaskea.

A spokesman said: “As a result of budget cuts, Libraries NI is required to save at least 4.4% of its budget (£1.4 million) in-year by March 2015. Further in-year savings have not been ruled out and immediate steps must be taken to deliver these spending cuts.

“A number of savings measures will be implemented throughout Libraries NI and this includes cuts to the staffing budget.”

Enniskillen library, which previously opened late three nights a week, now only opens late on a Tuesday. It is understood that three temporary staff were lost as a result of cuts.

Enniskillen Councillor Frank Britton described libraries as being ‘at the very heart of the community’.

“I’m sure that the board are aware that communities are attached to the library and the service.

I know they have fought very hard to orient the services they offer to the changing interest and demands of communities.”

“There are a lot of people who use it every single day – people who rely on the library and people who will be saddened if they’re hit by more cuts.”

The SDLP councillor also raised questions about what impact cuts could have on the new library in Lisnaskea.

“It’s good news that there’s a new library coming to Lisnaskea. The bad news is we’re not sure as to how these cuts will impact on its ability to operate.

“Changes like this to the library service always cause me great concern because of the impact to aspects of the library service. I’m sure the staff there are feeling very uneasy at the potential threats to the overall service and their jobs and livelihoods.”