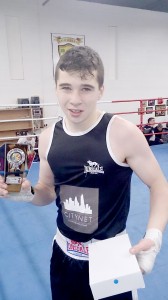 Erne Boxing Club’s busy January schedule continued with a third visit to Roscommon in as many weeks. Kaci Crowley, Pearse Mulligan and Ryan Copeland were all in action at the Castlerea Boxing Club tournament at The Hub Centre in Castlerea.

In the only competitive match of the evening for the visitors, Erne Boxing Club’s Ryan Copeland was pitted against Michael McDonagh (Geesala Boxing Club).

McDonagh, as a former Connacht champion and All-Ireland championship semi-finalist, represented Copeland’s toughest assignment to date.
In the opener, McDonagh started well and speared Copeland with good jabs and spinning off before Copeland could respond. However, Copeland continued to press and as the round progressed he got closer to his opponent and had some sporadic success.

After some stern words from the corner during the interval Copeland started the second round at a frantic pace and had immediate success. Copeland attacked relentlessly and landed with several hard shots to force his opponent to tie him up at every opportunity.

With a round-a-piece the final round was the decider and for the third time in as many weeks Copeland was tenacious and overwhelmed his opponent with constant pressure and volume of punches.

The unanimous points decision was deservedly awarded in favour of the Erne boxer who subsequently collected the Best Visiting Boxer accolade for his efforts.

Kaci Crowley in her second appearance of the season impressed the local crowd in an exhibition contest against Shuana Flynn (Castlerea BC). Crowley’s jabbing was sublime as she got the better of all three rounds.

Pearse Mulligan warmed up for his pending Mid Ulster Novice title challenge with an exhibition contest against Pat Grady (Loughlynn BC). Grady was a last minute change of opponent and had a sizeable weight and height advantage but Mulligan put in a determined display and when he got in close to his opponent landed with some solid overhand rights.

Erne Boxing Club Coach Sean Crowley said, “We had a great night tonight, young Kaci was mightily impressive and really is starting to look like a star in the making. Pearse Mulligan didn’t let the change of opponent unsettle him and fought very well despite being at a physical disadvantage.

“As for Copeland, we’re probably going to get barred from boxing in Connacht now, that’s three of their top boxers he’s beaten over the last three weeks and receiving the Best Visiting Boxer Award says it all.”

Erne Boxing Club will have a team of four competing at the Mid-Ulster Novice championships in Banbridge this weekend.