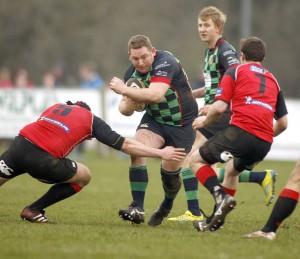 Philip Falconer got through for Clogher Valley’s first try against Donaghadee.

Fielding without seven regulars Valley began brightly, playing both against the wind and up the slope, against a Donaghadee side full of confidence from their win against CIYMS the previous week.

It was all Valley in the first quarter. When the Valley pack muscled the Donaghadee eight off their own scrum ball on 15 minutes, Stott and Armstrong linked to bring play well into the home side’s 22.

A loose pass from Valley prevented what would have been a deserved score. The relief was to be short-lived when, after a good shunt by the Valley pack at scrum-time, Ellis found Falconer who proceeded to barge his way through the home defence to score Valley’s first try on 19 minutes.

After a Valley move broke down on 27 minutes Donaghadee made their first significant incursion into visitors’ territory which led to a penalty. Luckily for Valley the kickable penalty was missed.

This galvanise the home team who started to test the Valley defence, with an outstanding turnover tackle from Breen averting a Donaghadee score on 32 minutes.

Following another misguided pass by Valley, Donaghadee hoofed the ball into Valley territory. The kick was spilled by Valley and landed into the hands of the chasing Donaghadee winger. The winger gratefully gathered and galloped over from 30 yards out for a try under the posts. The conversion put the home side 7-5 in front on 35 minutes.

The second half saw Valley starting without Treanor who had to depart with injury.

In an error-strewn second half both sides sought to put the game out of reach but a combination of poor passing and decision-making kept the result in the melting pot.

Donaghadee seemed poised to score in the third quarter, with their scrum half having an influential game. However Valley were equally game in repelling the attacks with Holme and Falconer brave in the tackle.

Valley’s scrum finally regained ascendancy towards the end of the third quarter signalling a period of profitable pressure by the visitors. First, Bennett, McAleer and Falconer led the charge in bringing play into the Donaghadee 22 on 67 minutes.

Then a Valley maul was held up on 5 metres and the resulting scrum saw the Valley pack pushing the Donaghadee eight back at a rate of knots with Ryan Wilson touching down for a try on 69 minutes.

The tricky conversion was goaled by Holme to leave Valley leading 12-7.

With ten minutes to go it seemed that a mounting penalty count might be Valley’s undoing as the home team sought to restore their lead, with Orr yellow-carded on 71 minutes.

Things went from bad to worse for the Valley on 77 minutes as they were forced to complete the game with 13 men, Stott being yellow-carded.
The Valley pack however rallied to see the game out. A deserved, if unconvincing, victory for Clogher which leaves them still leading the pack behind Instonians in Qualifying One.