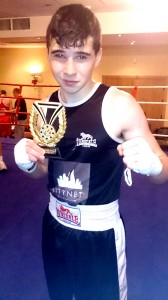 Whilst many of us were enjoying the Christmas break, the Erne Boxing Club had several combatants in action over the festive period with rising prospect Ryan Copeland scoring a duo of wins.

The action started at Loughglynn Boxing Club tournament in Tulsk, Roscommon on Christmas Saturday with Brandon Cassidy seeking to build on his Louth championship success against the host club’s Patrick O’Grady (Loughglynn BC).

Cassidy started well and landed a solid right cross to shake his opponent in the opener but O’Grady was a very cute boxer and was adept at using the lay-back to make Cassidy fall short with his punches. All three rounds were extremely close and agonisingly the majority decision went in favour of the home boxer.

Ryan Copeland had a tough assignment as he was matched with the more experienced Michael Ward (Gurteen BC). Ward started the brighter and working off the back foot was effective with his jab and move tactics. However, as the contest progressed Copeland cut down the ring effectively and landed with the heavier shots. In the final session, he upped the pace and one sustained attack resulted in his opponent taking a standing count and sealed a unanimous points win.

The Erne club then had three boxers in action at the Ballaghaderreen Boxing Club tournament in Brusna, Roscommon on Sunday.

Kaci Crowley was first in action against Holly Sharkey (Castlerea Boxing Club) in an exhibition contest. Sharkey started fast and swarmed into Crowley but the Erne boxer rode out the early storm before taking over and landed with some head-snapping crosses in a dominant performance.

Dylan McMahon’s first outing of 2015 ended in disappointment, when he dropped a majority decision to the host club’s Chris Henry (Ballaghaderreen BC). McMahon started tentatively and stood off his opponent in the opener but in the final two sessions he pressed the action.
There were several very good exchanges throughout and both combatants fought their hearts outs and again the contest was extremely close with the decision going to the local favourite.

The afternoon finished on a high for the Erne club with Ryan Copeland scoring his second win of the festive period with a unanimous points win over Conor Murray (Riverside BC). Murray was a Connacht championship finalist last season and represented another step up in class for Copeland. Murray started the brighter landing with sharp jabs and proved elusive. However, as the opening round progressed Copeland cut the ring off more adeptly and applied good pressure and landed with some good shots to level the round. In the second session Copeland matched his opponent’s jabbing and started to beat him to the punch. As the round drew to a close Copeland landed with a good body shot and his follow up attack had his opponent trapped in the corner and forced him to take a standing count.

With the contest still in the balance going into the final session Copeland upped the pace and to overcome his more skilful opponent and after landing with several good punches in one blistering attack he deservedly collected the points verdict as well as another notable scalp.

Erne Boxing Club coach Sean Crowley said, “Although we dropped a few decisions, I am very pleased with the performances. Cassidy was up against an older and more experienced opponent and we thought he did enough to win, whereas McMahon lost a very close decision to last year’s Connacht champion but showed much improvement. Ryan Copeland responded to the disappointment of losing his Louth Open final with a brace of good wins and he’s now won three out of four so far this season and six of his last seven contests.

He adapted with the step up from Novice to Championship level very well and the progress he’s making is very promising.”

January promises to be a very busy month as Erne Boxing Club travel to the Castlerea tournament in Roscommon next week, followed by the Mid Ulster Novice championships in Banbridge.