Advertisement
HomeSportGAAThe trials and tribulations of the ‘weaker’ counties
Advertisement 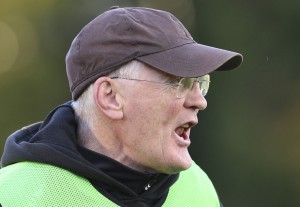 Wrapping up business at the recent county board meeting turned out to be quite interesting as delegates chewed the fat over a novel topic.

Peter McGinnity has been invited onto a national panel which has been tasked with taking a look at the problems facing counties who, shall we say, have been less than successful.

Croke Park is pondering the situation where a whole cluster of counties soldier from season to season without any realistic hope of major silverware coming their way.

This is especially so in the Munster and Leinster championships.

At least here in Ulster there is some semblance of a competitive structure which all nine of the counties can buy into.

The Roslea man had stated that anyone who had a particular view, opinion, brainchild, gripe call it what you will would be more than welcome to contact him.

These would be brought to the national group for more detailed discussion.

The upshot was that there was to be a lively debate on the imbalance of the current inter-county championship format and more pertinently the fact that for the majority of counties, the thought of actually winning even a provincial title was a pipe dream.

At the outset it was stated that though this was so in Fermanagh’s case there would be no question whatsoever of the county being excluded from the Ulster championship. That was a no go scenario.

Beyond that there was no reason not to take a look at a variety of formats that could be woven into the championship with a view to giving the plethora of ‘weaker’ counties something realistic to target.

Some of the comments made were eminently sensible.

There was the statement that the qualifier system was all well and good but at the end of the day the only silverware on offer here was the Sam Maguire itself.

And such being so, it was fantasy stuff to think that a weak county would actually go on and win the thing. This just wasn’t going to happen.

Reference here was made to Fermanagh’s run in 2004 when we got as far as a semi-final replay, losing by three points to Mayo.

But that was a total one-off. Something on those lines by another also ran county could well be half a century down the line.

The point was made that at club level we have no problem in having senior, intermediate and junior championships at club, province and all the way to national level. So what’s the hang up about having the same format at inter-county.

The ladies association work that system to excellent effect.

Still the underlying feeling was that counties such as Fermanagh would be loathe to surrender their place in their provincial senior championship, so another approach should be taken.

To be fair to the Association in the recent past they have attempted to address the particular needs of those who will presumably never feature at the real cutting edge when it comes to the Sam Maguire chase.

There was the Tommy Murphy Cup, the ‘B’ Championship, but in time these fell by the wayside.

One suggestion put forward was that to give that kind of competition an injection by allowing the winner back into the All-Ireland race perhaps at qualifier round four or even in the quarter-finals.

This would certainly provide a huge incentive to the teams competing.

So a good range of thoughts and ideas were mulled over, but the key factor about the discussion was that it actually took place.

The GAA always bangs on about how democratic it is and how the views of the grass roots are taken seriously.

Judging by the views expressed in the Enniskillen club house earlier this month, the grass roots are beginning to stir.

I note that down in Leinster there are moves afoot to tinker with their championship in order to adapt to the totally unbalanced nature of their competition.

The GAA is a notoriously conservative body and change comes slowly but if the idea is good enough it finally sees the light of day.

As this column has noted before the county and provincial structure has served the Association splendidly since its birth and it is unlikely there will be major alteration to that.

But a bit fresh thinking on how to provide something in the region of 20 to 25 counties a realistic trophy to aim for is a worthwhile exercise.

Without doubt this could be achieved while still retaining the framework of the provincial structure.

Thinking caps on for the National Review body.

And some tinkering will be done eventually. Make no mistake about that.