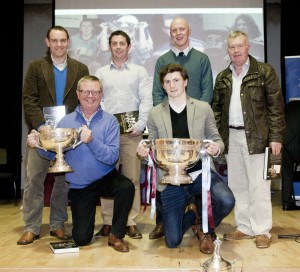 The travelling road show which is the province wide publicity blitz for the launch of the book titled The MacRory Cup, pitched up at St Michael’s last Thursday evening.

Nearly 300 were present, an attendance liberally laced with players who contributed to St Michael’s victories and defeats, euphoria and heartache in Ulster College’s most prestigious competition.

Also present were former staff members who had been at the cutting edge of the college’s initial entry into the competition almost half a century ago, Canons Patrick Marron and Sean Clerkin plus a sizeable platoon of parents who over the decades have all been a mainstay of the college’s Gaelic football enterprise.

Fear an Tí for the evening was college Bursar, Michael Duffy and his work in the organisation of the evening was warmly acknowledged by present college principal Eugene McCullagh in his opening address.

The principal noted that the MacRory was, “The most prestigious and keenly contested colleges football competition in Ireland.

It is a competition which has captivated so many of our players and has been a springboard for many of them to go on and become inter–county stars. A competition which is a riveting tale of annual pursuit of this much sought after title. Just a wonderful, wonderful competition.”

He went on to note that the, “The Hogan Cup is the jewel which has so far eluded us, but I have no doubt that Dominic Corrigan has that in his sights.”

Guest speaker for the evening was Canon Macarten McQuaid, former president of the college who in various capacities has been connected to the Drumclay college on and off since the late 1960s.

“The master of the semi-final defeat,” was how he was introduced by Michael Duffy.

Canon McQuaid wryly began by suggesting that he felt that, “Rip Van Winkle had been wheeled out to survey the years.

But going down memory lane there are so many incidents, stories and characters.

“1973, the year of the breakthrough after the run of final defeats and the many years of heartbreak that followed.

The historic year of 1992, the Corn na nOg also won that year and then victories in the golden era.

“No one said that the MacRory was going to be easy,” he stressed. “It is a long slog, a hard grind. You have the euphoria of winning and the dejection of defeat but there is always hope at the start of the year and every year the commitment and effort put in is always the same.”

In his closing remarks Canon McQuaid noted the input of players from across the Fermanagh county line to the St Michael’s cause, especially players from Trillick.

Memories
Both Dominic Corrigan and Peter McGinnity who have been the driving force of so many MacRory challenges over the past thirty years spoke of their experiences.

Current team manager Dominic Corrigan felt that what was really important was the, “People you meet, the memories you have and it is simply brilliant to see all those men coming back here this evening. These are the things that you cherish and St Michael’s is just a brilliant place to be.”
Peter McGinnity touched on the importance of St Michael’s to the well being of Fermanagh football.

“Playing at this level exposed players to playing against the best players in the province and this in many cases provided a seamless transition to inter-county football.

“This link has been to the benefit of Fermanagh football and on a personal level it was when I came to St Michael’s that I developed a love for the game and met people whom I wanted to emulate.”

Final speaker was book compiler JA Walshe. In his brief comments he noted that this evening was the sixth in the series of the province wide book launch and ,”Here this evening there is again the similarity in the stories being told, the emphasis on memories, the binding force of the group. For this book is not about one particular college but about all of them.”

Over the course of the speeches special mention was made of many people, too many to print here, but it would be remiss to omit the contribution of people from the early years, the mid to late 1960s and 1970s, famed St Michael’s pioneers Gabriel Brock and Michael Brewster both of whom were key architects in the emergence of the Drumclay school as a major force in Ulster College’s football.