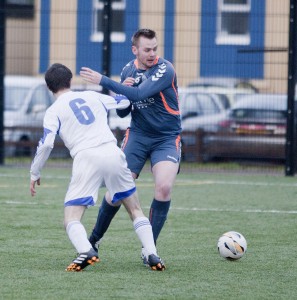 This game had it all on Saturday, numerous chances, great goalkeeping, penalties, rattling of woodwork and a red card as well as eight goals in what was a pulsating affair between two good footballing sides.

The point for Derrychara sees them join three other sides on nine points in what is a congested bottom half of the Division 2 table while Magheraveely remain in fourth in their first season in this division.

The goals flowed from the outset, the hosts taking the lead after three minutes. Matthew Irwin did well down the left wing before feeding Warren Stewart whose cross was turned in at the back post by Gregory Johnston.

The lead was short-lived as by the 14th minute Derrychara were level. A long ball forward was well controlled by Mickey McLaughlin, he swivelled past Paul Elliott and coolly slotted the ball beyond Gerry Grew in the Magheraveely goals.

The hosts responded well but found an inspired Derrychara ‘keeper Peter Phair hard to beat. Phair keeping out Matthew Irwin before saving at point blank range from Andy Little moments later. Having weathered a mini storm, Derrychara broke upfield and when Jamie Treacy fouled Mark Gallagher inside the penalty area, Gallagher dusted himself down to score from the spot as Derrychara moved 2-1 ahead with 22 minutes played.

Phair was again to deny Andy Little before Derrychara extended their advantage four minutes before the interval. A floated free kick wasn’t dealt with by the home defence and Roly Williamson fired a shot from the edge of the penalty area into the roof of the net for 3-1 at half time.

It took a while for the second period to get back to the frenetic pace of the first but on 65 minutes Magheraveely cut the deficit to one. Moments before the goal Joe Williamson had struck the post but on this occasion Robert Wiggins made no mistake when put through on goal.

Derrychara responded immediately to move into a 4-2 lead. Mickey McLaughlin grabbed his second of the game when left unmarked from a corner kick. A towering header giving Grew no chance.

Magheraveely threw caution to the wind, switching to a 3-4-3 formation. Matthew Irwin did well on the left once more and his cross turned in by Robert Wiggins for 4-3 with 20 minutes left.

In the 90th minute Magheraveely were awarded a penalty kick when Andy Little was fouled, Gregory Johnston beating Phair from 12 yards for 4-4. There was time for Warren Stewart to blaze over from close range in a goalmouth scramble while in the last attack of the game Andy Little beat the offside trap and raced through on goal only to be hacked down by Paul Fingleton outside the area. Fingleton was duly red carded, the free kick came to nothing and the final whistle was blown to end a dramatic game at 4-4.