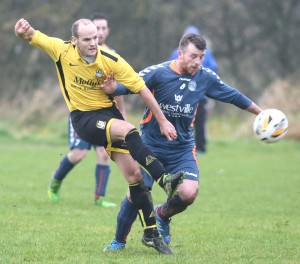 This was a massive game for both sides at the wrong end of the division two table and it was Lisnarick who turned on the style to pick up a vital win for a result that lifted them off the bottom of the table.

In the process they moved above the home side as well as drawing level with two other sides in the table and they will hope that this will act as a catalyst for them to climb away to safety.

The visitors broke the deadlock after a quarter of an hour when Kevin McCauley crossed the ball for Mark McCauley to score with a header. It was just the boost that Lisnarick needed and they moved 2-0 in front when McCauley scored again, this time from an acute angle, after a fine pass from Proinsias O’Kane.

The visitors were well on top at this stage with their keeper Peter Gormley only having one worthwhile save to make in the opening period. Peter Law, Mark McCauley and O’Kane all had further chances to score for the visitors but it remained 2-0 at the interval.

Derrychara United were the better side on the restart but despite a period of pressure they failed to make it count and Lisnarick scored against the run of play through Law to leave them in a very strong position. Derrychara United then pulled one back when Dillon Martin’s header flew into the top corner of the net past Gormley.

The home side then exerted a spell of pressure but despite forcing a number of corners and free kicks they never really created any clear cut chances. Lisnarick were content to sit back and soak up the pressure and hit them on the break and that’s exactly what they did with Law getting his second of the afternoon to make it 4-1.

Lee Glass did pull one back with a neat finish from the edge of the box after he had controlled a clearance from Brian Bonnar but it was the visitors’ day and they wrapped things up late on when O’Kane ran from midfield with the ball to score.