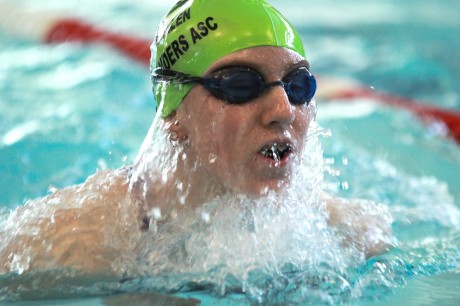 Enniskillen Lakelanders had a great representation the second Swim Ulster Development meet held recently in Ballymena, with a super level of success for the intermediate swimmers.

Many swimmers came home with medals and / or Qualifying Times for Open Meets.

12 year old Rhiannon Dolan and Lewis McCartney achieved their goals for the season when they both swam their third qualifying time of the year enabling them to move on to the next level of competition – Qualifying Galas.

Rhiannon Dolan has doubled the number of weekly swimming session that she attends and has shown fantastic improvement since.

Her first race of the day was 200m Freestyle and Rhiannon finished in Gold Medal position with a 24 second improvement on her previous personal best.

The next event for her was 200m backstroke where Rhiannon finished with Bronze and a PB – this time by 33 seconds.

The final race for the Lakelanders was the 400m Freestyle and she finished fourth with another PB. Two top 10 finishes and a top five finish in 200m breaststroke were achieved by Lewis McCartney. His breaststroke time of 3:39.53 showed an improvement of more than seven seconds on his previous PB. In the 200m Individual Medley (IM) Lewis knocked five seconds of his seeded time to achieve his final qualifying time.

Laura McCaffrey’s (12) interest in swimming was renewed after the very successful Halloween swim camp and Laura began with a Bronze medal in the 200m freestyle and finished with a new two second PB and a Gold Medal in the 100m butterfly – narrowly missing out on a qualifying time for the event. Jack Maravelakis, age 13, is relatively new to competitive swimming but came away with a Bronze and Silver medals and new PBs.

Eleven year old Méabh Dolan’s first event was 200m backstroke, finishing in a personal best time of 3:21, just two seconds off qualifying time and in the top ten. Next for Méabh was the 100m breaststroke, not her favourite stroke, finishing in 1:58 in this very competitive 19 heat event.

To finish the evening Méabh competed in the 400m freestyle, her first attempt at this distance, recording a personal best in 6:43 securing a top ten finish. Sophia Williams continued her improvement with a top 10 finish along with an enormous 35 sec PB in 200m backstroke.

The next development gala takes place on 17th January 2015 in Lisburn. The entries for this are to be submitted to the coach by 16th December.

Next week the younger swimmers compete in the second Forest Feast AquaSprint in Armagh.