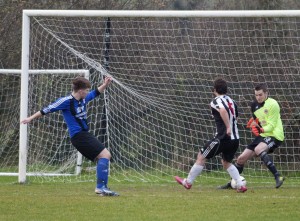 Richard Sadiler rifles this shot at goal for Kesh during their win over Dergview Reserves.

With both sides tied on eight points and loitering in relegation territory this was a must-win game. It was Kesh who played all the football over the 90 to ease to the win against a disappointing Dergview outfit.

Kesh’s Grant Ellis, David Fitzpatrick and Nicky Allen set the template for a strong defensive performance from the outset. The homesters steadily settled, and after a few misses from Mark Jones they got their opener thanks to the stylish Mark Thompson. In the 18th minute Thompson chased down a lost cause ball and shook off the challenge of two Dergview defenders before lashing home a left footed shot into the top left corner from just inside the area.

That goal filled Kesh with conviction and the rest of the half was played almost entirely in Dergview territory. The next goal arrived 12 minutes later. Mark Jones slipped the visitors’ offside trap and was one on one with the keeper, but unselfishly laid off to Stephen Simms who had the straightforward job of firing home into the unguarded net.

Seven minutes later and Jones was provider once more. He drove towards goal along the endline before cutting back to Richard Sadiler who found the net with an emphatic drive. On the stroke of time Jones was unlucky not to open his own account when a lob sailed across the face of goal and just wide.

It was a dramatically improved Dergview who took the field at the start of the second half. They finally fashioned some spells of attacking pressure, forcing their first corner of the game after 53 minutes.

Kesh defended soundly though and killed Dergview’s momentum with a fourth goal in the 56th minute. Nippy Lee Walker slipped through the visitors’ defence and laid off a pass to Mark Jones who tapped home from close range for a deserved goal.

The only Dergview player who could honestly be said to have risen to the occasion was Clive Crompton. It was the defender who had the ball in the homesters’ net after 67 minutes, but his effort was correctly ruled out for off side.

Walker also set up the final goal for Kesh. He rifled a shot that seemed goalbound, but it slammed off the right post to James Wood who controlled the ball before showing good technique to volley home with four minutes of regulation time left.

There was time for one more chance, Kesh carving open Dergview with one of their best moves of the game.

The ball was slid right across the face of goals into the path of player manager Niall Ellis who looked certain to net, but his shot went just wide of the left post, to much amusement on pitch and sideline it must be said.

After the final whistle Ellis got over the slagging to pay tribute to Kesh’s 40-year-old man of the match Mark Thompson. Aside from breaking the deadlock, Thompson was a composed presence on the ball, picking the right passes and maintaining an impressive work rate.

“He’s a example to any young cub that wants to play football in my opinion,” said Ellis. “He was outstanding today. The first goal summed Mark Thompson up, brute strength, character, commitment, attitude, wanted the ball, forced the mistake, took his chance when he got it. At 40 years of age to play so well at any level of football, never mind division one Fermanagh and Western is a credit to him and it’s great to have him at the club.”