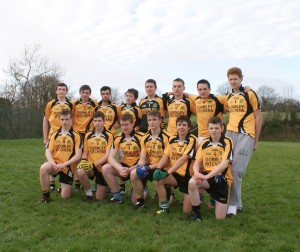 Erne Gaels minors pictured ahead of their quarter-final against Donaghmoyne

It’s a soft Sunday morning in Belleek as Erne Gaels go through their paces ahead of ahead of their meeting with Monaghan minor champions Donaghmoyne at the St Paul’s Ulster club minor football championship tournament in Belfast.

Manager Liam Mimna cajoles, encourages, chides and nurses his players through the session, the greasy ball providing a good test for the handling conditions the Gaels can expect on Shaws Road next Sunday.

They are the last club side in Fermanagh left standing in 2014, everyone else now safely ensconced in the off-season. They have been on the go since January, the minor title was secured with a 3-10 to 2-10 victory over neighbours Derrygonnelly in July. Naturally, maintaining focus in the interim has been a tricky proposition.

“It’s been very hard to keep them together,” said Mimna. “Eight of that team played under 16 as well. We’ve a few fellas away at college and it’s very hard to get them back for training, that’s my biggest problem. This year we’ve an awful lot of injuries and we’re struggling to get a team out. We have 16-17 at the minute with four injuries and we only have 19 of a panel on our best day. They’re working hard on it and hopefully with the physio done this week we should have two of them at least back for the Ulster quarter-final.”

Among the injury worries are Dara Dolan who chipped a bone in his foot playing basketball last week, half back Colm Keown who is struggling with back problems and midfielder Michael Óg McGarrigle who has only just returned to full training.

Still, it’s not every day your club gets to gear up for a lash at provincial honours and Mimna believes it is a great opportunity for his player to develop and hone their game at the top level.

“Overall, for Belleek it’s great that we’ve a minor team in Ulster competition. It’s only the second time in our history we’ve won the county minor title. I think this team is good enough to go on and do very well in this competition, providing we don’t come a cropper with more injuries.

“They’ve played a lot of football and injuries have started to take their toll on them at the end of the season. I think it has been a very hard year for some of the players that have been involved in a lot competitions. They’ve put up a great show this year for Belleek and I’m looking forward to the challenge against Donaghmoyne.”

Speaking of the Monaghan champions, how much do Belleek know about their Farney opponents?

“I don’t know much about Donaghmoyne. It’s new to us going up to play them,” said Mimna. “From what I’ve been told they’ve won all their games in Monaghan easily. We could say we’re in the same scenario ourselves, we won all our games well in Fermanagh, but it doesn’t tell you much about the depth of the team.

“We had some tough games against Derrygonnelly, Enniskillen, Lisnaskea and Maguiresbridge, plus we had four of our best team missing in the county final and we still pulled it off on the day against all the odds. I think they have the ambition in themselves to go ahead and do very, very well, they are a very dedicated group of lads.”

That triumph against the odds has fed into a real feel-good factor in Belleek and that has created a benign circle with players responding with great positivity to the backing from their community.

“There’s great buzz, there’s a bus going from the club here,” said Mimna. “Over the years Erne Gaels has performed very well for a small club and a small group of people from 1963 when it was founded.

“To win our first minor title in 2011 was a great boost and the people of Belleek came out and supported them in a big way. I give great credit to their parents who come to all their games. No matter where we travel in Fermanagh these parents come out.

“The people of Belleek love to see the kids playing football are very dedicated people and that’s why this team is performing so well because they get great support from local people.”