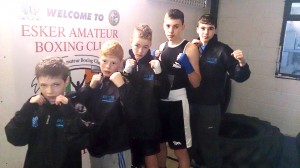 The Erne Boxing Club’s preparations for the busy December and January months ahead took them to the Esker Boxing Club tournament in Lucan last weekend.

First in action and making his ring debut for the Erne side was John Stokes against the hosts Rhys Lassandro (Esker BC) in a 28kg contest with both boxers getting their hand raised after an entertaining curtain raiser, all contests on the day being adjudged draws.

Brandon Cassidy continued to stay busy and was given a tough workout by the hosts Andrew O’Brien (Esker BC) in a 54kg contest. It was a contest off two halves with Cassidy doing some good long range work and O’Brien taking command when in close.

Dylan McMahon had the hardest assignment on paper as he was pitted against the hosts very stylish and more experience Killian Geraghty in a 42kg contest. McMahon gave his opponent a bit too much respect in the opener before finding his range in the second and edging the last round with his crisper punches.

Pearse Mulligan had a tricky assignment against the host’s Cian Duggan in a 39kg match up. His opponent’s southpaw stance gave him a few problems but Mulligan was bullish and had good success when applying pressure.

Erne’s final competitor saw the return of prospect Ryan Copeland who returned to ring after being out of action for six months. Copeland showed little signs of ring rust and it was apparent early on that he was too strong and powerful for his Dublin opponent Sam Malone of Cabra BC in a 57kg contest.

Erne Boxing Club’s coach Sean Crowley said, “These exhibition tournaments are very important for the development of boxers as it gives them the opportunity to pit their abilities against another boxer and to concentrate on their own performance without the pressure of the result. However, with all that in mind our club performed very well today and all five boxers more than held their own. I’m confident that had the contests being judged that we would have come away with at least two victories today and possibly a third.”

December sees Erne Boxing Club competing in the Tyrone and Fermanagh championships, the Louth Open championships as well as Donna Owens boxing in the final of the National Female Open tournament back in Esker with the Ulster Nine Counties championships to look forward to in January.