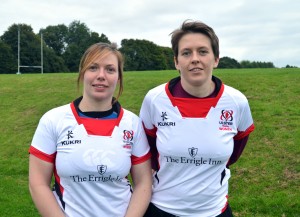 Noreen Nethercott (left) and Leona Hallett both touched down for Enniskillen against Newry.

It was the last match of the season for ERFC’s ladies team and a resounding win on the road in very difficult weather conditions.

Enniskillen were in search of a bonus point victory and hoping Carrickfergus could do them a favour against Cavan in the other 2pm Sunday kick off to secure the league title.

Enniskillen hit the ground running with a score from the opening phase of play after a good move through the backs, Clare McMorrow the benefactor scoring under the posts allowing Shauna Murphy the easiest of conversions.

Then 15 minutes later Murphy sent a searching kick over the head of the onrushing Newry defence and a great chase from Alana McCaffery saw the Newry full back give away a scrum five meters from her own try line. Enniskillen won the ball and Captain Leona Hallett picked up from the base and ran in another touchdown under the posts.

Enniskillen were pressing hard, looking for those extra two tries to get them the points they so desperately needed. Their hard work typified by a heroic work from front row Sarah Evans who dived on a loose ball to win possession. The ball was recycled and Murphy went in under the sticks.

The opening score of the second half came thanks to patient work from the visitors. Enniskillen forwards, burrowing hard up front 22 meters out from the try-line, sucked in the Newry defence. The backs called for the ball and a sweeping move found Colette McMorrow on the wing to touch down in the corner.

The rest of the game was largely uneventful with Newry and Enniskillen exchanging a few yards in the middle of the park until a moment of brilliance from Noreen Nethercott delivered what must surely be the individual try of the season. She received the ball from Murphy on the half-way line before jinking in and out of three Newry players. Nethercott then lined up the full-back, hit low with her right shoulder and pirouetted around the helpless Newry player before handing off a desperate last ditch challenge to run the ball in under the posts from 30 yards.

Enniskillen had done all they could, but unfortunately Cavan ran out victors in their game and won the league by a couple of points. The girls would like to thank their coach and manager Robbie Watson for his hard work during the season and team sponsor Blake’s Of The Hollow.