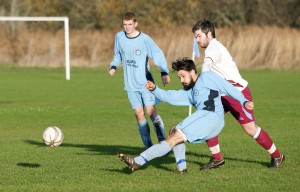 Enniskillen Town United kept their title hopes alive but they had to do it the hard way as they came from behind to shade a nine goal thriller at home to Tummery Athletic on Saturday afternoon.

It was a result that keeps them in second place in the division one table and their manager Rory Judge was just pleased to get a win.
“It was a Jekyll and Hyde performance from us,” said Judge.

“We were good going forward and awful at the back, but at the end of the day we showed battling qualities to come from behind in the second half and the three points were the most important thing.”

The home side scored a candidate for the quickest goal of the season when they had the ball in their opponent’s net after only 20 seconds, Frank Wallace sending in a cross which was turned into his own net by Stephen McMahon. Five minutes later it was 2-0 when Wallace cut in from the left wing and curled a beauty into the top corner of the net.

Tummery Athletic though began to come into the game and they pulled a goal back when a shot from Ryan Cunningham took a deflection on its way past keeper Pat Cadden.

On the half hour mark it was 3-1 to the home side when Ryan Hanna finished in style to the roof of the net past the stranded James Kirwan. They looked to be well on top at this stage but the visitors hit back to get on level terms by the break.

First of all Ruairi Sludden burst through the Town defence to score and on the stroke of half-time Cunningham converted a penalty to leave it all square at 3-3.

In the early stages of the second half Cunningham was unlucky not to score again when he lobbed Cadden but his effort came back of the crossbar.

He soon made amends though when he got on the end of a Sludden cross to tap in from close range although the Town defence should have cut it out.

The home side went with three at the back in an effort to get back into the game and it worked with Mattie Keenan getting the equaliser. With five minutes to go.

Town grabbed then the winner when a cross from Rory Connolly was met by the head of Hanna.