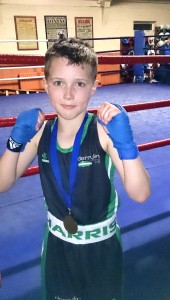 The boxing scene has been very quiet of late and there are reports that the Derrylin Boxing Club is no more. But fight fans and supporters of the club need not fear as the club is still in full operation and has now changed its name to the more fitting Erne Boxing Club.

“Although we’re still based in Derrylin our membership is very much widespread across Fermanagh and cross-border with Cavan. Therefore, after much consideration we felt the name Erne Boxing Club would give us a clearer identity and that more people would have greater affinity with the club going forward.”

The Erne Boxing Club had its first outing of the season with a team of five competing at the Dealgan Boxing Club tournament in Dundalk on Saturday night.

Dylan McMahon was first in action against the host club’s Sean O’Donnell (Dealgan BC).

Unbeaten in his first two contests McMahon was seeking his third straight win but this time was up against a tricky southpaw.

The contest was a tactical affair as both fought cagily. Overall McMahon appeared to land more punches but disappointingly, a split decision went in favour of the home town man.

Harris Crowley restored pride for the Erne Boxing Club in the next contest.

Crowley landed with some quality shots and forced his opponent to take a standing count in the final round to put the decision beyond all doubt and deservedly get his arm raised in victory.

Brandon Cassidy fought gamely for three rounds against the host’s Shane McKeown (Dealgan BC) and landed with some good quality punches notably the right uppercut but struggled with his opponent’s swarming southpaw style and dropped a close decision.

Aaron Burns back in the ring for the first time in over 12 months got off to a slow start against the host’s Alan Kelly (Dealgan BC). He came on very strong down the stretch to finish the contest well on top but only for the decision to go agonisingly in favour of the home fighter once again.
However, the evening finished on a high for the visitors with their unsung Pearse Mulligan scoring his second consecutive win with a one-sided points victory over Ryan Cash (St Cianan’s BC).

Mulligan weighed into his opponent from the very start and his swarming tactics worked as he outworked his opponent in all three rounds to collect a deserved win.

“It’s a very pleasing and promising start to the season. To come to an established club like Dealgan and score two good wins and to be slightly aggrieved about two of the decisions when boxing away from home is a sign that you’ve done very well. All five lads boxed well and more than held their own, we look forward to building on from this and to the competitions ahead.”