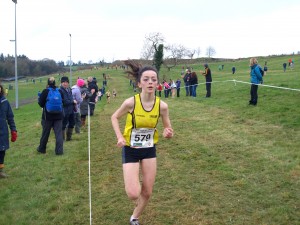 Fermanagh athletes produced some good performances at the second stage of the Ulster / NI age group cross-country championships, held on a very demanding course near Virginia in Cavan on Sunday with an individual title for Edel Monaghan and team medals for St Michael’s at U17 and U13 level, bringing their tally to five for the seven age groups they contested at Jordanstown and in Cavan.

Pride of place must go to Irvinestown girl Edel Monaghan, a student at Mount Lourdes, who on Sunday was running in the colours of Omagh Harriers, as she scored an authoritative success in the U17 girls race over 4000m.

Always in the leading group and looking composed Monaghan did not panic when her Omagh club mate Toni Moore came through in the closing kilometre from off the early pace to move on to the shoulder of the Fermanagh girl. Edel simply stayed with the pace and round the final bend and up the long 300m drag to the finish she showed all her strength to move clear for a fine victory which serves notice that she will be a contender at both national club level and the various schools championships in the spring.

St Michael’s had a reasonable day taking two sets of team medals, bringing their tally for the two championship weekends to five, and, although their lack of stamina work was exposed by the very demanding course, this is something which should be easily remedied with the right attitude over the weeks ahead.

The U13 team, made up mainly of first year athletes, packed very well with a late burst from Oisin Cassidy just taking him clear of James Cox and Rhys Cassidy as just four seconds separated the three St Michael’s athletes, Conor Murray having a good first outing in a blue vest to complete the scoring ahead of Oliver Hughes-Jordan and Peter Dolan as the team took third behind Letterkenny AC and Shercock AC and within striking distance of both.

St Michael’s U17 team were also involved in a good battle with Letterkenny AC with the Fermanagh lads in pole position going into the last of three gruelling circuits, but it was the Donegal lads who proved a bit stronger in those closing stages helped by a bit of confusion between the St Michael’s A and B squads as strength in depth proved, on this occasion at least, to be more of a hindrance that a help.

Ryan Flanagan continued his fine early season form to lead the team home just one place ahead of the rapidly improving Paul Breen. James Boyle, running for St Michael’s B team was next across the line with Domhnall Lynam and Jacob Britton just back from a collar bone break completing the A squad scoring.

Jack Scallon, Bruce Worley, Gavin Green, Conal Boylan, Oisin Morris, Conor McNally, Joe Worley and Ruairi Kelly completed the St Michael’s finishers as they were the only team fielding two complete squads at U17 level, but all the athletes know there will need to be a huge improvement if they are to challenge Rathmore and St Aiden’s CBS for Ulster or Irish schools honours in the spring.

Some of the leading athletes will now head to the All-Ireland finals in either Dundalk or Dublin over the next three weeks while for others it will be down to the hard graft of training with the spring championships in mind.