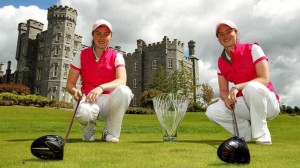 THE Maguire golfing twins, Leona and Lisa Maguire who are currently on a sports scholarship at Duke University in North Carolina, have been retained for the 2015-16 season.

And, after their first year there, the twins have made a splash, with Leona and Lisa helping Duke to fourth top college site nationally and Leona ranked at number three in the individual listings.

The girls, who are still members of Slieve Russell Golf Club, were born in Ballyhiugh, Ballyconnell and, through their interest in golf, they have strong Fermanagh ties.

The family lived in Enniskillen for a period, during which the girls became members of Castle Hume Golf Club and, in fact, started their game there under the eye of their dad, Declan. The sisters went to school in Swanlinbar where their father taught. He now teaches in Castletara, also in Cavan.

Their mother, Breda is their number one fan and is looking forward to her daughters coming home on 15th December for a well deserved three-week break.

In the year just ended, Leona has totalled a 70.33 stroke average, placing her in the top seven of all four college tournaments. She has carded even or under par rounds in 11 of her 12 outings, and collected three in the 60s.

Meanwhile, Duke’s Blue Devils golfing squad will be joined next season by Virginia Elena Carta who has been a member of the Italy team since 2010, is ranked number one in Italy and has seven career victories under her belt.

She was a member of this year’s European Junior Ryder team and competed in last year’s Junior Solheim Cup.