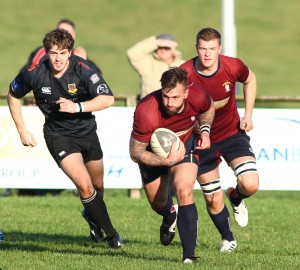 Skins Captain Jamie Johnston makes a break with the ball.

Enniskillen started well and looked in no way intimidated by this side who had in the previous round claimed an impressive Clogher Valley scalp.

The first scrum of the day looked to be only slightly in Enniskillen’s favour, but after a forward pass from Enniskillen another scrum was awarded to Ballymena and now Enniskillen didn’t hesitate to apply the sort of pressure they have displayed in previous weeks. The home side drove Ballymena off the ball with ease to steal the first of many against the head, the front row of Fox, Cathcart and Beatty no doubt relishing another day in the ascendancy.

Nick and Ashley Finlay both pressured the Ballymena back three with accurate displays of kicking gaining important territory for the forwards, but Ballymena to their credit dominated the line out. Enniskillen were then penalised at the breakdown yet again in their own half allowing Ballymena to get the first points on the board.

The chase from the restart was good from the home side and they ended up reclaiming possession. Then some slick passing from the back line saw winger Kyle Johnston, and then Nathan Richmond, almost slip through out wide. Thankfully the forwards supported very well and Jamie Johnston was there to pick and go after the tackle to get the first try, converted by Nick Finlay.

A fumble at the restart gave Ballymena possession but the defence was solid from the home side and with an opposition scrum inside their half Enniskillen put on a devastating drive to steal the Ballymena put in and send Johnston rampaging off the back of the scrum, then offloading to scrum half Patrick McCleery who executed a perfect kick and chase which he claimed beautifully for a well worked try under the posts, converted once again by Finlay to leave the score 14-3.

Ballymena responded well, stealing an Enniskillen line out deep in their own half they then were awarded another penalty and were soon threatening the Enniskillen try line, getting over at the second time of asking.

After stealing another Ballymena put in at the scrum Nick Finlay got the ball and placed an excellent kick, with an industrious chase from the back line forcing Ballymena to touch the ball down on their own try line, giving Enniskillen a scrum on the five metre line.

A controlled drive from the forwards escorted the Ballymena pack over their own try line before the opposition were forced to collapse the scrum and the referee awarded the home side a penalty try, which Finlay converted to leave the score 21-10 at the half.

The second half saw Ballymena with a lot more possession, but the defence remained resolute. However Ballymena did thrive on some of Skins’ indiscipline and began to chip away at the scoreboard with penalties in the Enniskillen half, firstly for being offside in defence and again for the tackler not rolling away.

A further Ballymena penalty now left the score at 21-19 and Enniskillen in a situation they really did not expect at the end of the first half. Thankfully another powerful drive gave Enniskillen a penalty which Nick Finlay slotted.

With good work from Richard Beatty there was a turn over on the Enniskillen five metre line following a Ballymena line out and the maul that allowed Enniskillen to clear the ball, then a last effort from the Ballymena back line was well dealt with before the full time whistle to leave the final score at 24-19.

The First XV have a weekend off now but captain Jamie Johnston maintains they’ll be focused following the semi-final draw today which places them away to Qualifying One leaders Instonians, likely to be played on the 29th November.

“Ballymena were a very good side, they were well organised and relentless with their attack. Once again our scrum showed itself to be an extremely powerful weapon which gave us great go forward ball.”

Seconds go down
The Second XV suffered a defeat away to Dromore in the league but had many positives to reflect on, with excellent performances from young players Conor Hoy, Eric Elliott and Gavin Rogers in their senior rugby debut.