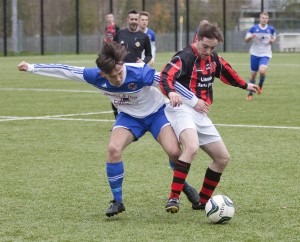 Lisnaskea Rovers remain bottom of the division one league table but they can count themselves very unlucky not to have taken anything from this encounter against Killen Rangers on Saturday afternoon.

Rovers’ manager Greg Copeland was nevertheless proud of the performance of his charges.

“It was certainly one of our best displays of the season to date,” said Greg.

“It was a much improved performance and as I have said before we are a very young side who are learning all the time. We played well to get a two goal lead but were then guilty of sloppy defending to let them back into it but even then we had chances to win it when it was 4-4 before they hit us with two late goals.”

The game was only five minutes old when Rovers broke the deadlock when Jason Flanagan headed into the bottom right hand corner of the net past Killen Rangers keeper Trevor Morrison.

That goal stunned the visitors and five minutes later they were in deeper trouble when Flanagan scored a brilliant goal when giving Morrison no chance with a thunderbolt to the roof of the net from twenty five yards out.

Things were going well for the hosts at this stage but that was about to change.

A Trevor Irwin cross was flicked on by Andy Crawford for Dale Lyttle to head past Rovers keeper Colin Copeland.

It was soon 2-2 when the Rovers defence failed to clear the danger and Crawford punished them from a near post header. Crawford was causing the home defence untold problems and he slipped the ball through for Mark Lecky to put Killen in front. Just before the break though Lisnaskea Rovers got back on level terms when Caolan Flanagan scored with a header.

Thirty six seconds into the second half Rangers got their noses in front again when Lecky returned the favour with an assist for Crawford to score.

It was soon 4-4 though when good approach play from John Wright saw him find Sean Malahey who poked in from a couple of yards out. At that stage the home side had chances to take the lead but Owen Curran was denied by Morrison while Wright fired over the bar from close range when he should have done better.

With ten minutes to go a long ball forward from Ryan Burke picked out Lecky who scored his second of the afternoon before the same player completed his hat trick as Rovers were caught out chasing the equaliser.