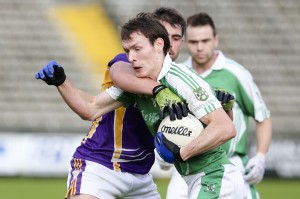 James Sherry pushes past Maurice Cassidy during the league final

Few would argue with the view Roslea are the Fermanagh side best equipped to make a challenge in the provincial senior club championship.

The Shamrocks have captured four of the last five Erne crowns, their only blip being in 2012 when they lost out in the early stages of that campaign to Derrygonnelly.

So Roslea then clearly the dominant team in the Lakeland county but unhappily they have had only limited success once they have moved beyond the county border line.

Four bids to make an impact on the Ulster side, but just one lone victory, that a win last season over provincial rookies Ballinagh of Cavan. Next came a clash with Donegal’s Glenswilly and it was again the end of the road for the Fermanagh representatives

Needless to say it has been a disappointing track record but Roslea at least will be bringing no shortage of experience into Sunday’s meeting in Ballybofey.

Quarter-final rivals St Eunan’s have a couple of older hands lynchpinning their side, Rory Kavanagh the highest profile plus veteran John Haran but essentially they are a side laced with young players.

But perhaps the most noteworthy feature of the Letterkenny display was the way they corralled Michael Murphy, restricting the Donegal talisman to a paltry three points tally over the course of the hour.

Late in the day Glenswilly bombarded the Letterkenny goal with a stream of high ball, but the challengers defence was able to smother it all.

Roslea’s attacking strategy is based on similar lines, long ball fired in to Seamus and Sean Quigley. If Letterkenny’s rearguard was able to restrict Murphy to a token tally, then Roslea will have been served a clear message that things could be very difficult indeed next Sunday.

Roslea have had a busy schedule over the recent weeks as they pushed on from their championship final victory over Teemore back in early October with league semi-final and final fixtures against St Patrick’s and Derrygonnelly respectively.

Being stretched by the dogged challenge of the veteran Harps will have attuned the panel for what will be a daunting test in Ballybofey.
Roslea’s strengths and strategies are familiar by now.

Defensively they are extremely adept. Niall Cassidy and Conor Quigley are the foremost figures in their defensive set up but all concerned have proven their worth with James McMahon emerging as a promising talent.

But as is usually the case it is the attacking players that invariably attract the most media attention and Roslea have two magnetic stars in Seamus and Sean Quigley.

As noted above there is huge onus on the duo but the support lines from Shane Lynch and Nigel Cosgrove is also vital.

Some doubt surrounds the availability of Sean Quigley, injured late in the league final, and should he be absent then Roslea will have been hit by a savage blow. But in the absence of definite news from the camp it has to be presumed that he will be on board.

With St Eunan’s confirmed as opponents perspectives may have changed somewhat.

Roslea suddenly the more experienced side and the task may seem that bit more manageable.

A real opportunity here for Roslea to head into the semi-finals in a season which has already seen it’s share of surprises.