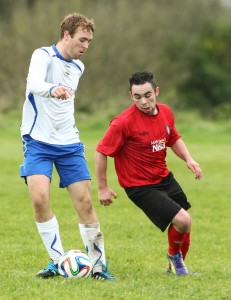 Irvinestown Wanderers closed the gap at the top of Division 2 with a convincing 5-1 success at home to Maguiresbridge at the weekend.

Elsewhere league leaders Enniskillen Santos drew with Derrychara and as a result Irvinestown are now just one point adrift in second place.

Wanderers hadn’t it all their own way in this encounter, but after a slow start and finding themselves one nil down, Paul Cassidy’s men turned in an impressive display with Chris O’Brien hitting a hat-trick for the second week running.

Maguiresbridge made the brighter opening and were rewarded with a goal on five minutes, a long ball forward allowing Ryan Nelson in behind the home defence to lift the ball over TJ McMulkin for 1-0.

This was a wake up call for Wanderers who settled in and tied matters on 13 minutes, Gary Maguire finding Chris O’Brien who raced clear to drill a low shot into the corner.

The contest ebbed and flowed during the first period with both sides having good spells of pressure. Wanderers though would lead 2-1 at the interval. An in-direct free kick inside the penalty area saw Kevin Swift touch the ball to Gary Maguire who fired home through a crowd of players.

Irvinestown took control of the tie on the large playing surface at the Bawnacre in the second half, O’Brien snapping up his second after a shot from Liam Murphy wasn’t held by the visiting goalkeeper.

A slick move between Swift and Maguire not long after released Rory Cassidy down the right and his first time cross was headed in by O’Brien to complete his hat-trick before substitute Lynden Johnston made it five after O’Brien unselfishly squared the ball for Johnston to tap into the net.
Wanderers are in good spirits ahead of a difficult trip to third placed Strule this weekend.

“We are very happy how things are going at present and are just taking it on game at a time,” said Fred Lynch.

Maguiresbridge on the other hand have slipped down the table in recent weeks, this defeat, a third straight loss and with leaders Santos on Saturday, the slide may continue.