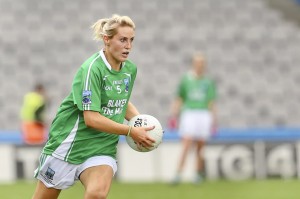 Marcella Monahan has been nominated for a TG4 All Star Award

Fermanagh’s year may have ended in heartbreak with defeat to Down in the All-Intermediate final but two of their players were rewarded for their brilliant performances over the year with All-Star nominations.

Flying wing half back Marcella Monahan picks up a nomination along with Caroline Little who is also nominated for Intermediate player of the year.

Monaghan is among 18 players fighting for six defensive places and the Newtown lady certainly deserves to be in the mix.

Rock solid in defence Monaghan was also a big threat going forward and scored a wonder goal in the quarter final against Waterford to turn the game the Erne girls way.

Little meanwhile has been nominated at midfield with five other ladies also vying for the two spots up for grabs.

Little moved back from the forward line this year and continued her brilliant form getting in on the scoring with regular consistency.

Little is also up for Intermediate player of the year. She is joined in the nomination list by Down duo Aileen Pyres and Kyla Trainor.

The winners of the three player of the year awards and the All Star team itself will be announced at the 2014 TG4 All Star Awards at the Citywest Hotel on Saturday, November 8.