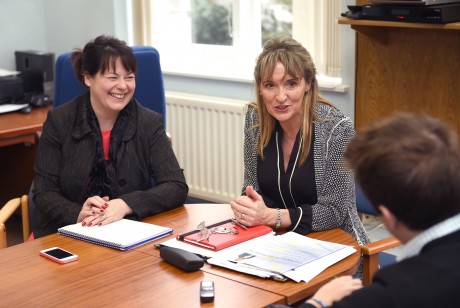 The 33-year-old woman alleged in a documentary that she was raped by a suspected IRA member in 1997 – when she was a teenager – and that the organisation conducted its own inquiry into her account.

Ms. Cahill also claimed in the BBC’s Spotlight programme that the IRA responded to her allegations by subjecting her to an interrogation and forcing her to confront her alleged attacker.
Additionally, she alleges that the republican movement – including Sinn Fein – covered it up. Ms. Cahill also claims she went to Gerry Adams for help. Mr Adams, however  has denied any suggestion he was involved in a cover-up.

Speaking in Enniskillen on Thursday the MEP said the matter had to first and foremost be dealt with in court, but stated she believed her party leader and his refuting of the allegations.

“I am very, very mindful there has been a court case and I don’t want to have anyone tried by media. We need to be mindful there was a court case and this needs to go through the court. Sinn Fein has been very, very clear on this. From my release from prison and in any engagement or conversations that I have heard people talk about with regards to any issue it has been about directing people to go to PSNI and to report whatever it is that needs to be reported.

“When I was on the policing board  you found sometimes people may want to disclose to you personally and you’re always very mindful ‘I am not the person with the expertise to deal with this’ and you’re always trying to direct people towards the most appropriate people that’s going to give them the support and the guidance that they need.”

When asked if Gerry Adams should provide information on the expulsion of alleged sex offenders from Northern Ireland to the South, the MEP stated that if he had such information he would reveal it.

“I think that maybe there has been a degree of focus and attention given to a comment that has been made as opposed to us being very sensitive. This is a very sensitive issue and I think we need to approach it with a degree of sensitivity.”