Advertisement
HomeSportSports DigestRugbyKathryn is a woman for all seasons
Advertisement 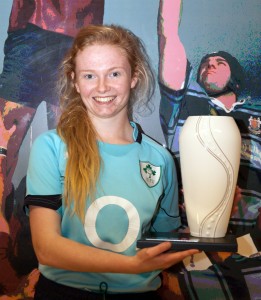 Wondering what on earth you are going to do with your life at 18 is probably as core to the human experience as breathing. But multi-disciplinary sporting phenomenon Kathryn Dane just short-circuited that particular poser by doing everything.

Rugby, soccer, hockey, golf, Dane has tried her hand at them all. And it turns out her epicurean sporting tastes are complimented by a seemingly inexhaustible reserves of talent.

Suffice it to say, it was a busy summer for Dane.

“At the start of the summer I was playing with the Irish sevens under 18 squad,” said Dane. “Then I had the European sevens event in Sweden at the start of September. Over the summer I was selected to train with the Ulster senior ladies, however the interpros clashed with the Irish sevens training, so I chose stick with the sevens. Recently the Ulster u-18 team was in the inter-provincial development group where we beat Connacht and Munster and drew with Leinster so we were unbeaten.

“I captained the Enniskillen RFC under 18s side that won the Ulster Cup in April, beating Harlequins in the final. A couple of weeks before that our school team, Enniskillen Collegiate, won the Schools tag rugby cup against Grosvenor.”

That win with the Collegiate was the schools fifth in a row, with Dane being involved in the last four. This sporting excellence is part of a developing pattern.

“I was very young when I started. I live about a minute away from the rugby club and my dad had a huge interest in rugby and I’ve been involved from a young age and loved playing the game.”

Rugby isn’t the only sport showing Dane the world. She is also an accomplished soccer player.

“I started playing for Ballinamallard Football Club from the age of seven or eight with the boys, then got to the age of about 12, 13 where you’re not allowed to play in the [boys] leagues and then filled my time with school football winning the Carnegie cup. Eventually I came of age to play with the Fermanagh Mallards and I played centre midfield for them and we’ve been successful this season getting promoted and winning the Division Three NIWFA Concentrix cup.

“With the Northern Irish football team I’ve travelled a lot around Europe. I was 15 when I went to Scotland and Wales, since then I’ve been to places like Belgium, Estonia, France, Malta, Latvia. Training is quite time consuming. It requires a lot of commitment, but when you get to go away to places you would never dream of getting it’s lovely to get the opportunity.

You wonder where Dane finds the time, but hockey also squeezes itself into her sporting mix.

“I play quite a bit of hockey with the school and about two years ago I joined the Enniskillen ladies hockey team and it’s been a great experience. I’ve learned a lot of things through playing with players with a bit more experience than myself. We won a divisional hockey cup this year, so that was brilliant. They’ve expanded through a really good youth set up so hopefully hockey in Fermanagh will really be on the up.”

Then there’s the golf…

“I do a wee bit of golf with Castlehume, my uncle Richard [Heap] is captain, he kinda drags me into it!”

And did we mention that Dane does a bit of voluntary work too?

“I volunteer every Monday in ward one in the hospital. It just involves chatting to patients, feeding them their food. It’s really nice, I really like that interaction with patients. You feel part of the team even though I’m only a volunteer.”

Dane is a woman who sets herself ambitious targets and has the talent and work ethic to reach them. When she sets out her goals for the coming few years it’s difficult to imagine her meeting with anything other than resounding success.

“I’d quite like to do medicine at university and I’d love to go to Queen’s and join their rugby club. I’d like to work my way back into the Ulster set-up and maybe the Irish set-up, which would be my dream.”