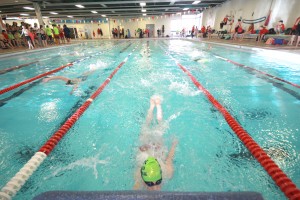 The gala is an ideal platform for beginner swimmers to get their first taste of competitive swimming in a fun and friendly environment. The event also allows slightly more experienced swimmers to obtain personal best times to gauge what level of forthcoming competition they could achieve while giving the senior swimmers a short fun event to compete in. There were more than 200 swimmers and 700 entries.

The Swim Meet consists of 20 different events run in heats according to previous best times in two age groups; 11 and under and 12 and over. medals are awarded in six different age groups; 9 and under, under 10, 11, 12, 13 and 14 and over. Competitors can enter one or more strokes; backstroke, breaststroke, butterfly, freestyle and Individual Medley (IM) – a combination of all four strokes.

Nine-year-old Ellie McCartney continued with the form that saw her reach the Irish Age Groups Division 2 final in June earlier this year by winning five gold medals from five swims. Ellie dominated the 9-year-old and under girls section in every stroke with personal bests in all strokes. Although in the 50m fly Ellie won by just 0.2 seconds, in the breaststroke she won by more than eight seconds and was the fastest 50m swimmer at the event in that stroke. Sophia William’s progression to the next swim group paid off when she achieved third place and a bronze medal in 50m freestyle.

In the 9-year-old boys section Matthew Dolan reached the top of the podium in his favourite stroke 50m breaststroke, taking almost eight seconds off his previous personal best. He swam to a silver medal in the IM and followed this up with a bronze in the fly by smashing his PB by 17 seconds and a bronze in freestyle. Jake Cadden produced a fantastic performance in the 50m backstroke to capture a gold in his first individual gala as well as PBs in each of his other events. Louie Burns finished with a silver medal and bronze medal in 50m freestyle and breaststroke along with three new personal bests.

Rowan Martin, aged 10, took 1.5 seconds off his best ever time to secure his first ever swimming medal – bronze in 50m backstroke. Brett McLean matched this feat with a bronze in the 100 IM.

11-year-old Niamh O’Kane continued to demonstrate her prowess in the speed stokes with three gold medals, one silver medal and one bronze medal. Niamh was the fastest 50m butterfly swimmer in the pool with a new personal best time of 37:88. Méabh Dolan finished the day with a number of PBs and a bronze medal in 50m freestyle.

The large crowd loved the battle between Oisin McCaffrey-McManus and Cian Rooney from Marlins – aged 11. On this occasion Oisin obtained five personal best times along five silver medals in his races. This competitive match looks set to be continued at another event. Dara Flanagan made the podium alongside Oisin with a bronze in breaststroke and three personal bests in his other events.

Twelve-year-old Caitlin Love also showed her improving form from the Ulster Schools Gala with five medal haul – four gold medals and one silver medal. Caitlin had good PBs in all her top podium positions including an eight second best in the 100m IM. Laura McCaffrey (12) showed that her renewed interest in swimming was paying off with a gold medal in 100m freestyle, with a nine second PB, and two silver medals in backstroke and IM – both new PBs. Rhiannon Dolan, also 12, achieved two bronze medals and personal bests in breaststroke and backstroke along with forth place in freestyle.

Dara McGandy (12) continued to show his athleticism with two golds in backstroke and breaststroke and two silver medals in freestyle and IM. He also recorded three new personal bests. Kealan McShea showed his strength to win the 12 year 100m butterfly in a time of 1:39.26. Lewis McCartney, also 12, swam to a bronze medal in the 100m breaststroke and continued to show improvements that helped him get his first qualifying time in Larne.

Sorcha Lavelle, age 13, continued her winning ways with a gold in breaststroke, silver in butterfly and two bronze medals in freestyle and IM. Sorcha also took almost 20 seconds off the backstroke PB to finish fourth showing that she is improving all her disciplines. Rachel Evans just pipped Sorcha to the 100m freestyle silver with a new PB time of 1:13.04. Rachel also had a terrific 100m breaststroke swim to finish forth. Hard work and determination paid off for 13-year-old Caitlin Martin when she swam to a bronze medal in the 100m backstroke achieving a new personal best of 1:25.72. Caitlin also got four more top five places and two more PBs.

Thirteen-year-old Connor O’Hare made a welcome return to the pool for the Lakelanders and left with gold medals in 100m breaststroke, 100m freestyle and 100m IM. Jack Marvalakis, also 13, has only started swimming competitively this year and made the podium three times – silver in 100m breaststroke and IM along with bronze in backstroke. Jack also bettered his previous times in these three strokes and freestyle.
Natasha Love (14) had another great event with three gold medals in 100m backstroke, 100m breaststroke and 100m IM along with a silver medal in 100m fly.

Michael O’Hare, age 15, took silver in backstroke and fly and bronze in breaststroke and IM with PBs in each event. Rory Morris, also 15, swam hard to win silver in 100m freestyle in a time of 1:06.12.

The medals were distributed as the event was in action and overall the Enniskillen Lakelander picked up 25 gold medals, 21 silver medals and 18 bronze medals not to mentions a great many personal bests.

Well done to many of our new swimmers including the youngest – 6-year-old Jamie Lannon.