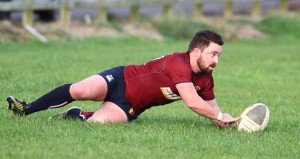 Nick Finlay touches down behind the posts to score a try.

Enniskillen First XV continued their good form at the weekend with a resounding victory over league newcomers Holywood at home in  a one sided affair.

The Skins’ physicality looked to be a cut above from the outset with a solid take at the restart, but it was Holywood who scored the first points when one of their backs broke through to gain substantial territory against the run of play. Ashley Finlay thwarted a certain try, and the visitors had to settle for three points from a penalty at the breakdown.

Skins continued their excellent scrummaging form with prop combo Richard and Gareth Beatty, and hooker Steven Fox taking the Holywood put-in with a devastating drive, and following a couple of close quarter carries Nick Finlay kicked over the top and took the ball on the bounce to score under the posts, and convert to leave the score 7-3.

Then with a scrum penalty and ball in hand yet again the Skins forwards carried relentlessly and effectively drew in the opposition defence, leaving plenty of space out wide for a nice display of handling in the back line to put Nathan Richmond across the line for the second score.

Despite some small errors and indiscipline Skins continued to play expansive rugby with the back line looking dangerous and First XV debutante Conor Hoy a threat on the wing. Jamie Johnston was unlucky to have a try held up following a clinical line out, but the resulting scrum was excellent and ended in a pushover try for the home side.

Holywood were struggling at the end of the half with Gareth Beatty, Maguire and Buchanan making the yards when and inflicting huge collisions on the opposition. Richmond at inside centre also made good ground and brought play back up in sight of the Holywood try line. Kaine Holden spotted space on the blind side of the ruck and clinched his first try with a run from the five metre line off scrum half Paddy McCleery.

The second half looked set for more of the same with Ashley Finlay at full-back nullifying any attempt by the visitors to gain territory and Nick Finlay at out-half continuing to use his numerous battering ram options to excellent effect. With an overlap out wide Nick executed a nicely timed miss pass to full back Ashley who managed to get the offload away to winger Zach Charlton for a try in the corner.

Soon afterwards a spectacular try came for Alan Wilkinson who, unable to take a wayward pass, went for an volley which happened to bounce perfectly. Wilkinson seized the ball with glee and went in under the posts.

Good yards were then made from an Ashley Finlay counter attack which was then shifted out wide through David Buchanan to Conor Hoy on the wing. Hoy showed great awareness to get the offload away to Alan Wilkinson for his second try.

Good running from Johnston and Finlay yet again had Skins back in the opposition half immediately after the restart and trundling up the field, and with scrum-half McCleery rucking industriously, Cadden reacted well to shift the ball out to Zach Charlton to score in the corner.

Another charge up field saw Holywood get the put-in for a scrum on the five metre, which Enniskillen then mercilessly took against the head, obliterating the opposing pack in the process, number eight Johnston picked and went for the line but passed to Wilkinson running a hard line from inside centre, securing his hat trick for the day.

The game was blown up early by the referee for apparent safety reasons as numerous Holywood players seemed to be struggling to carry on, leaving the final score at 57-3.