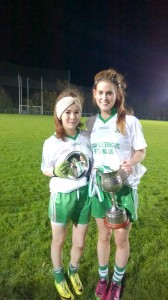 Player of the match Sarah Britton pictured along with Captain Naoimhin Daly pictured after St Joseph’s victory in the division two final.

Ederney proved too strong for Aghadrumsee in this division two league final with the old adage that goals win games proving correct as Ederney rattled the net four times over the course of the hour.

Two of those goals arrived in the first 15 minutes and were real hammer blows for an Aghadrumsee side who had banked on getting off to a good start. On the stroke of half time Ederney swooped for their third goal to leave the score at the break 0-7 to 3-4.

The teams were even enough in terms of possession in the first half but the winners always carried a little more punch in attack.
Dana Teague was to land two of her side’s goals along with a brace of points to boot.

For Aghadrumsee Sarah Jane Flanagan in midfield and Dearbhla Murray caught the eye with Brenda Bannon a regular on the score sheet. Sarah Keenan in goal for the losers was also in fine form despite conceding four goals. The St Macartan’s net minder pulled off a number of excellent saves and could not be faulted for any of Ederney’s four goals.

For the winners Emma McCusker and Eimear McGirr were two players to shine throughout. But this was a complete performance from the girls in green. Their defence was solid and never really looked like they would let Aghadrumsee in for a goal while they also picked up plenty of ball around the middle, especially in the second half. In attack Ederney always carried that goal threat and it was always felt that had they needed to shift up the gears that they had a little more in the tank.

Shannon Cassidy and Allanah Ward both took their goal chances with aplomb as Ederney swept to this division two league title. It capped a wonderful year for the St Joseph’s ladies who also secured the junior championship earlier in the season.