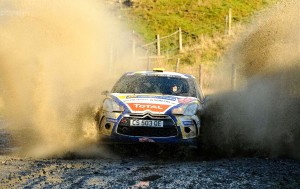 Alistair Fisher and Gordon Noble proved their recent JWRC win in France was no flash in the pan after taking a start to finish victory in Rally GB last weekend.

The Trillick driver really proved the crews’ worth by winning over his rivals by 1m 18s a result which secured him the runners up position in both the WRC2 and the Junior World Rally Championship. Fisher agonisingly missed out on the title by a single point, had it not been for an unfortunate result earlier on the year in Portugal the title could well have been coming home. Fisher however isn’t going to let the near miss deter him.

“We achieved our target for the rally and we did it without any mistakes,” said Fisher. “It was important for us to take charge in Britain. This season was very positive and we showed that we have what it takes to win.”

Success was also achieved by Phillip Morrow who took the Group N victory from a hard charging Josh Moffat who had his Gerry McGarrity prepared Mitsubishi on GB for the first time ever. Josh set some very competitive times over the period of the rally and was mixing it amongst a lot of more experienced crews. The rally also proved relatively successful for Kris Meeke who had held third position for a large part of the event however a puncture on the closing stages dropped the Citroën works driver down to sixth position overall.