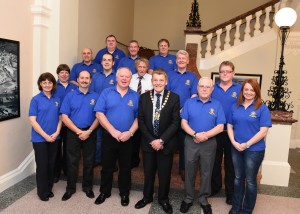 Fifty years of organising motorsport in the county by Enniskillen Motor Club (EMC) was recognised by Fermanagh District Council with a Chairman’s Reception in the Townhall last Thursday.

The event was attended by EMC members along with family and friends. Proceedings commenced with an address from Council Chairman Bert Johnston.

Mr Johnston alluded to the long history of motorsport in the county, going back to the foundation of the Enniskillen and District Motor Club in June 1928 which organised the Enniskillen 100 motorcycle road races between 1929 and 1952. That club fell into abeyance, but a new one was formed after a meeting in the Townhall in January 1964.

The considerable talent the county has contributed to the sport was saluted.

“The very first Ulster Rally in 1976 was won by Cathal Curly and Austin Frazer, founder member of Enniskillen Motor Club who then went on to navigate for many years for Bertie Fisher. He still plays a prominent and active role as a president of the club,” said Mr Johnston.

The Chairman spoke with pride of the place of his native Ballinamallard held in the sport locally, with the Fisher family playing a leading role and referred to how special it was to him to live in the house where Bertie Fisher was born and brought up.

Mr Johnston acknowledged the vital work of the EMC committee in sustaining the rich motorsport culture in the county. He was particularly gratified to see EMC playing a key role in the recent revival of the Enniskillen 100 event.

EMC Chairman Drew Wilson, then took to the rostrum and delivered his address. He began by thanking Mr Johnston for hosting the evening.
Wilson spoke about the formation of the club and extended best wishes to club president and founder member Austin Frazer for a speedy recovery, ill health precluding his attendance at the reception.

Wilson detailed the highlights of the preceding year, before outlining the busy schedule throughout anniversary year.

“There were our annual events such as the navigation, stage rallies, autotests and rally time trials. Also , after an absence of 23 years, we ran a successful sprint at St Angelo airport in July,” said Wilson.

“In September our flagship event took play, the Lakeland Stages Rally, a special stage held in the forests of Fermanagh. Our competitive year has just finished with the popular two wheel drive rally held in Derrygonnelly being another success.”

The valuable contribution of sponsors was acknowledged as well as the generous donation by Gladys Fisher of some of her late husband Bertie’s trophies to present to prize winners at several of the events.

Mention was made of the EMC’s charitable fund-raising efforts over the years, with local good causes benefiting to the tune of in excess of £60,000.

Wilson concluded his address by thanking the Chairman and Fermanagh District Council staff, in particular Robert Gibson, Eddie McGovern, Keith Cullen and Joanne Cunningham for their help over the years and expressed his hope that this goodwill would continue when the new super council’s commenced operation.

The evening concluded with food and chat as EMC members reflected on a milestone well-marked.

There was an entry of 36 drivers for Omagh Motor Club’s Dickson & Co Rally Time Trial at Omagh Shared Educational Campus.
Gareth Sayers topped the rankings overall in his Evo with an overall time of 4:15.71.

Mervyn Wilson was the best of the local drivers in Omagh. His Mazda 323 was round in 4:46.40, a spin which earned him 25th overall and seventh in Class One, Modified Saloon Sports and Rally Cars up 1400cc.

Fellow Enniskillen Motor Club member Scott Thompson wasn’t far behind, getting his Mazda 324 home in 4:50.08. That saw him come in just behind Wilson in Class One at eighth.