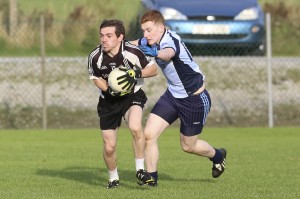 Heading into the final quarter Aghadrumsee had forged out into a six point lead and looked to have this Erne Cup Two league title secured.

But over the closing 15 minutes the game was turned on its head as Belcoo staged a spirited rally to set-up a pulsating finale.

Belcoo popped a couple of points to give them a chink of light and then five minutes from time they poached goal before nudging themselves in front. But Belcoo were unable to hold on to their hard won advantage and a late raid from Aghadrumsee saw half forward Damian Flanagan seize an equalising point.

A fine contest overall with not a great deal to separate two well matched sides especially over the opening 30 minutes. An Aghadrumsee goal on 20 minutes had however given the men in black an edge and they were to build on that from the restart before their effort flagged.

For Belcoo corner back Barry McGovern had an excellent match while in the middle of the park Declan Leonard got through a mountain of work.

Up front for the O’Rahilly’s Gary Maguire was a dependable place kicker and he chipped in with a healthy quota of points in both halves.

As for Aghadrumsee, their top performers on the day included Thomas O’Hara who had a steady contribution at corner back and further up the park for them both Ryan Boyle and Damian Flanagan featured prominently.

Points for Aghadrumsee in the first half came mainly from Stephen Flynn who shot three of the side’s first four points, but the crucial score for them was to be the goal. Full forward Dale Crudden the marksman as he saw a shot initially parried out but the rebound fell kindly and he had no difficulty in slotting home at the second time of asking.

Ryan Boyle and Damian McCarville were to add a single each as the half wound to a close and the leaders were apparently in good shape for the second period.

Belcoo who had early scores from Gary Maguire plus a terrific individual score from marauding corner back Ryan McGovern, had faded to some degree in the lead up to the interval and over that third quarter they continued to be on the back foot as Aghadrumsee advanced further with scores tapped over by Stephen Flynn, Damian Flanagan and Liam Og Strain.

Perhaps Aghadrumsee did become a trifle complacent with their sizeable lead and they allowed Belcoo back into the hunt.

Belcoo edged closer with Maguire again on the spot with his place kicking and then they startled the leaders with a goal, Ciaran Conlon getting onto the end of a pass centred across goal to flick home.

The momentum now with rejuvenated Belcoo and Phillip Leonard levelled the game and inside a minute Conlon tossed over the lead point.
But Damian Flanagan had the final say, leaving the sides level.