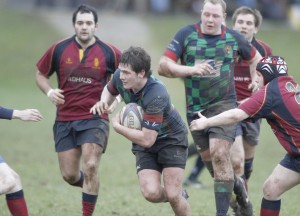 For the first time in many years Valley have lost two consecutive league games.

Valley started well. A long penalty clearance by Holme found touch in the Bangor 22m. Valley catch and drive from the lineout was text book and McAleer was driven over for a converted try and a 7-0 lead within the first five minutes. Bangor launched a series of attacks and only a fine open field tackle from McKenna stopped a certain score.

The first scrum after 10 minutes indicated that the home side were in for a torrid afternoon in that phase of play.

Aided by the rising penalty account against Valley, Bangor continued to attack. A rare lapse in Valley tackling in midfield allowed the No 4 to scamper home under the posts for a converted try and a 7-7 scoreline. Probably fair at that time.

This stung Valley and they began to put together phases of play which drove Bangor back to their own 22 and kept them there.

Then Valley lost a forward for 10 minutes to the sin bin as he was adjudged not to have rolled away form a tackle on the half way line.
Unfortunately Valley were making too many mistakes with their continued possession.

From one of these Bangor collected the ball deep in their own 22 and decided to run from defence. Again a number of Valley missed tackles allowed the winger to run 70 metres for another Bangor try against the run of play. Within minutes Bangor had increased their lead with a penalty and Valley trailed 7-15.

Then, just before half time, Valley left winger Stott made another good break, on a number of occasions he had made good yardage, and chipped behind his opposing winger and would have won the race for a touchdown. However he was cynically taken out with a full blooded shoulder charge which resulted in the game stopped and him being taking to hospital after a fifteen minute stoppage.

The only sanction was a yellow card when it should have been red and a penalty try.

From the penalty Valley attacked but Bangor were able to hold out to half time.

Valley upped the tempo at the start of the second half but were then rocked when a flanker retaliated to a blatant shirt pull back with a supposed punch and was given a red card. On the restart the game went to uncontested scrums as Bangor had no replacement props thus nullifying a Valley strength.

The game became very disjointed as 14 man Valley threw everything at Bangor.

It was all Valley and they did manage to reduce the deficient to 12-15 with another line out catch and drive which saw Treanor score but the one man less with uncontested scrums meant that their execution at all times had to be perfect.

The penalty count also started to move to Valley but on two occasions deep in Bangor territory the decision making was poor.

Firstly to kick at goal, against the elements, and then to take a quick tap, when not organised, when on each occasion a kick to touch for the lineout would have been the correct decision. Bangor were let of the hook and managed to close out the game.

Valley will now have to rebuild their season starting with the visit of Dromore next week to the Cran but this will be hampered with the loss of Stott for an extended period, a probable ban for the red card offence and two further injury concerns at hooker and prop to an already depleted squad. However by the same stage last season they had also lost two games but went on to win the title and so cannot yet be written off.