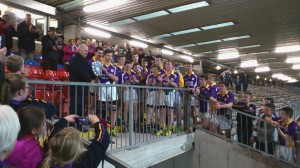 There was a chill in Brewster Park on Tuesday evening for the under 16 division one league final, and it would have nipped particularly bitter if you happened to be a Gaels man.

Derrygonnelly ran in five goals and sealed a comprehensive under 16 league and championship double.

Enniskillen were down key personnel, but that notwithstanding there were stretches in this game where they competed much better than in the one-sided championship final a couple of weeks back.

It was well enough balanced in the opening exchanges, the Enniskillen rearguard working hard to thwart a Derrygonnelly attack that had scalded them badly in the championship final.

That didn’t stop the Harps getting an early goal though, a sweet ball from Gavin McGovern teeing up Colm Jones to net.

A minute and late Nathan Jones won possession, switched on to the right and slotted a nice point. It looked like the Derrygonnelly machine was humming nicely, despite the greasy, cold conditions.

But then the Enniskillen defence got a taste for their work and it wasn’t until the end of the quarter before Derrygonnelly could forge a breach, Odhran McBrien pointing well from play to make it 1-2 to no score.

Prior to that Derrygonnelly had also lost Conor Cassidy to knee injury and that seemed to upset their attacking formation for a brief period.

While the Enniskillen defence was working their socks off the same could not be said of the attack. A number of decent free-scoring attempts were spurned before big midfielder Eoin Beacom finally stepped up to the place kicking duties and opened Enniskillen’s account in the 21st minute.

By now the Harps were starting to pick holes in the Gaels defence and the Enniskillen side’s case wasn’t helped in the latter stages of the half when they started to get on the wrong side of the referee.

Odhran McBrien won the kick out after Jones’s free and he hit a diagonal beauty into the path of Jack Love who was flying in on goal. No mistake from Love as he swept the home forcefully into the top right corner

Then a minute into injury time Colm Jones had a goal shot well parried away by Cian Newman, but it only went as far as Jason McGlone who drew on it first time, finishing crisply to the back of the net

Derrygonnelly 3-3 Enniskillen 0-1 at half time.

Enniskillen drafted in Conor Rippey for Gavin Green at half time and the move had an instant impact, Rippey’s lively play giving the Harps something different to think about.

The Gaels got the ideal start when Callum Jones laced a ball in which was collected by Gavin Green, alone for once in a bit of free space in the Derrygonnelly defence. Green made no mistake with his shot to the onion bag.

Derrygonnelly weren’t just out of sight at this point and their play reflected a slight nervousness at this turn of events.

Still, a super distance free from Odhran McBrien and then a strong point from Gavin McGovern almost immediately wiped out the goal’s impact.

With six minutes gone Gaels showed they weren’t gone just yet. They pulled out their best move of the match, a delightful interlinking move down the right side of the pitch ended with the ball going to Conor Rippey who slammed home to narrow the margin to seven points.

That, however, was to be as good as it got for the Gaels. Derrygonnelly turned the screw McBrien and McGullion getting even further on top in midfield and the half back line giving the Gaels their fill of it.

As the game moved into the final quarter Colm Jones got his first score from play. Directly from that kick out Aidy McKenna won the ball and the Harps showed quick hands to get the ball to Jack Love to slip home an artisan effort to the Enniskillen net. He’s quite the finisher this one.

That more or less marked the end of any serious Enniskillen efforts to win the game and Derrygonnelly were able to ease their way to scores.

A free from Colm Jones was followed by points from Ryan McGovern and Jack Love.

The fifth goal arrived with seven minutes left of normal time. The ball was switched across the pitch to Gavin McGovern. His shot was so close to the post in looked like it had gone wide, but, to Enniskillen’s chagrin, it was most certainly a goal, an exquisite placed effort

Two more Colm Jones points from play put the cherry on top of what has been a perfect domestic season for Derrygonnelly.

Attention now switches to Saturday and Dromore where the Harps will be taking on Crosserlough in the Ulster under 16 championship. And in form like this, you’d be a brave man to punt against them. 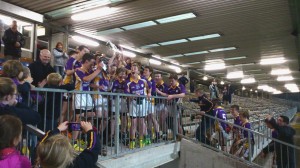 Derrygonnelly Harps celebrate after receiving the under 16 league trophy