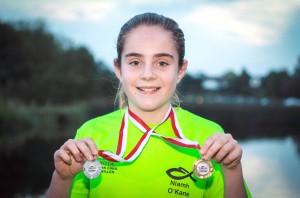 Niamh O’Kane with her Gold and Silver Medals

On Sunday the Enniskillen Lakelanders Intermediate squad made the long journey to Larne for the first Swim Ulster Development Gala of the year in search of Personal Best times, Medals and Qualifying times.

These meets are used to encourage younger novice swimmers to gain experience and swim longer distances at a competitive level.

Ellie McCartney reproduced the form that took her to the Division Two finals in June. As a 9 year old Ellie won the first of her four Gold Medals in the 200m Breaststroke with a fantastic final heat racing against a sixteen year old, two fifteen year olds and a 14 year old. the race ebbed and flowed against an older swimmer from City of Belfast but Ellie powered though the final 5m to become the fastest 200m Breaststroker competing at the event.

The time of 3:18.27 has achieved her a place in the Ulster Age Group Season Finale. Ellie followed this up with another Gold Medal in the 100m Backstroke her weakest event. Another battle took place in the 200IM with Ellie eventually finishing 11 seconds ahead of her nearest rival. Ellie’s evening finished with another solid swim in the 100m Freestyle and another 1st place.

Rhiannon Dolan has made a concerted effort to train more this season and it paid off when she received a medal in each of her events; Gold in 200m Breaststroke, dropping 22 seconds from her PB, leading from the front in her heat and leaving the other competitors in her trail and obtaining a Qualifying time. She also produced a massive performance in the 200 Individual Medley reaching the podium again for Bronze. She finished the day with another 3rd place in 100m Freestyle with a new PB of 1:18.86. Rhiannon will have more qualifying times in her sights in the second of these galas in early December.

Niamh O’Kane, 11, shows how the extra hours of training have paid off when she completed her last event, 100m Freestyle, placing first for a Gold Medal along with a qualifying time. She also achieved a Silver in the 200IM with another qualifying time and an new Personal Best.

Niamh narrowly missed out on the podium in the 100m Backstroke but will be happy with the knowledge that she now moves to to the next level on competition along with Ellie McCartney to the Qualifying Galas.

13 year old Regan Breen competed in 3 events in Larne. Her stunning performance in the 200IM smashed her Personal Best by 24 seconds earning her a Silver Medal. PBs were also achieved in the 100m Freestyle and the 100m Backstroke where she finished 5th. Matthew Dolan, was also competing in his first Developmental Gala and he produced lifetimes best times in each of his 3 events as well as a Silver Medal in 100m Breaststroke. 4th in 200m Freestyle smashing his Previous Best by more than 50 seconds and 6th in 200m Backstroke – PB by 34 seconds.
Matthews sister, eleven year old, Meabh Dolan knocked 5 seconds of her 100m Backstroke to finish 6th and she also achieved a top 10 finish in her age group swimming 100m Freestyle.The youngest Lakelanders male competitor, Louie Burns is only 9 years of age and this was his first Swim Ulster Gala. Louie smashed his 200m Freestyle best time by 37 seconds and also got a new personal best in 100m breaststroke finishing 4th. Anna Gillespie gave a great performance in both her events achieving top 10 finishes in the 200m Breaststroke ad 100m Freestyle – Not bad for a first major gala. Sophia Williams also made the long trip to Larne and was rewarded with a 18 second improvement in the 100m Backstroke.

Twelve year old Lewis McCartney had another satisfying day out with 3 personal bests and a Qualifying time in 100m Breaststroke, he also put in excellent performances in 200 Freestyle and 400 Freestyle – where he knocked 34 seconds of his best ever time in this gruelling event. Owen Smyth, one of the Lakelanders most dedicated Intermediate swimmers, showed his consistency by obtaining Personal Bests in all three of his race, got into the Top 10 in the 100m Breaststroke and took 7 seconds off his best time.

The Lakelanders had their most successful event in many years with eleven swimmers obtaining 27 Personal Best times, 2 Bronze Medals, 4 Silver Medals and 6 Gold Medals. In addition to this there were 5 qualifying times achieved including and Ulster Age Group time.

The Coach, the Committee and the parents should be proud of the display these younger novice swimmers gave and they really have laid down the gauntlet to the senior swimmers competing in their event in 2 weeks time.