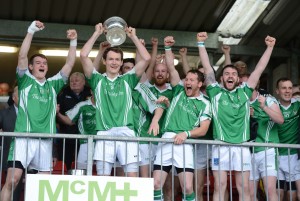 The pursuit of goals is an obsession verging on addiction for Roslea. And it’s hard to argue with them when their three majors here proved the winning of the game.

For ten minutes they battered at Teemore’s door at the start of the game. Point chances, and they had a few in that period, seemed to mean nothing to them. Only after Seamie Quigley raised that first green flag did they raise their sights at all. Their second goal came just after the break and took the puff out of incipient Teemore momentum. The final major erased any hopes of a late late show from their opponents and essentially ensured the New York cup rested in Roslea for another year.

The opening stages of this hard-fought decider were very much a case of feeling each other out, with defences on top. It was going to take something a bit special to open the scoring. That was what Declan Fitzpatrick delivered on eight minutes when he launched over a spectacular long range effort from out on the right.

Roslea struck with their first score of the game two minutes later and Conor Quigley was the creator. He raced on to the ball and slung it across the area from the right wing where Seamie Quigley met it with the fist, slamming to the back of the net.

Seamie Quigley added a point a minute later and it started to look as if Roslea had found their groove. Their rhythm was to be rudely interrupted though. Niall Cassidy took possession about midway up the pitch just under the John Vesey stand. Gerry Quinlan lined him up for a challenge, but despite bracing himself for the hit Cassidy was badly shook and there was an extended stoppage while he received treatment. In the end the county doctor Tom Kernaghan made the call for Cassidy to be removed from the field of play with suspected concussion.

After that stoppage Seamus Quigley pointed a free to settle Roslea again, but Teemore weren’t here to make life easy.

With seven minutes left in the half Eoin McManus floated in a long ball which contrived to evade everyone in the area, bounce in front of Sean Boyle and up into the roof of the net. Then two minutes later McManus pointed a free to make it all square at 1-2 apiece.

Roslea continued to hold faith with the long ball and the final score of the half came from that source. They won possession from a long delivery in and recycled it to Sean Quigley who pointed from close range.

At the end of the five minutes of added time there was telling incident as Hugh Brady beat Seamus Quigley to a ball when he was second favourite raising a roar from the crowd. Teemore were sending out a statement that they had the belly for this battle and a barn-storming second half seemed to be in store.

It certainly started with a bang. Yet again Roslea deployed the long ball and Niall Cosgrove showed huge determination to win it before feeding Sean Quigley who blasted home with real panache.

But, true to their tradition, Teemore refused to lie down. They hit the next three scores over a period of seven minutes to cancel out the goal. A splendid shot from Declan O’Reilly of the inside of the boot was sandwiched between two Eoin McManus frees.

Then as the final quarter loomed John Fitzpatrick sent in a dangerous ball in and Barry Owens’ flick flashed just wide of Sean Boyle’s far post.
That was followed by a near miss for Roslea, Sean Curry misplacing his kick out into the arms of Seamus Quigley who screwed his snap shot wide.

Roslea kept up the pressure and Teemore had to beat away a goal chance, but only scrambled it as far as Sean Quigley who pointed.

Then the game saw its second extended stoppage, Niall Cullen consulting with his umpires before doling out yellow cards to Cian McManus and Niall Cosgrove. That yellow was Cosgrove’s second and so he was red carded, but it took some persuasion before the Roslea man walked, evidently feeling hard done by.

Try as they might Teemore just couldn’t capitalise on their numerical superiority. The closest they came was when Joey Donegan created a chance for Barry Owens but Owens goal shot was quickly smothered.

The final nail in the coffin of Teemore’s hopes came two minutes from the end of regulation time. Conor Mulligan launched in a Garryowen which struck the post and came off the back of Sean Curry and deflected into the net.

Sport has its cruel side too.

Scenes of elation greeted the final whistle as Roslea secured their fourth title in five years. The honour of raising the New York trophy fell to the man of the match, James Sherry. Sherry paid tribute to Mark Harte and Adrian O’Donnell in his speech and there can be little doubt that that pair will now be turning their focus on Ulster with the intention of making a serious bid for further honours with the Shamrocks.

This ride may only just be beginning.