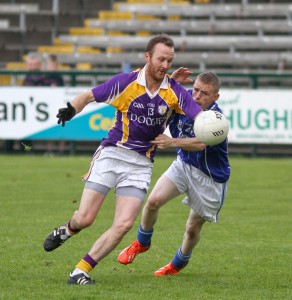 You have to feel for Sylvester Mulrone’s men, forced to taste semi-final defeat for the second time this season.

Devenish were looking to salvage something from a year where they had a played a lot of quality football, but they were denied by a Derrygonnelly outfit who went up through the gears in some style in the second half to draw down the curtain on the Garrison side’s season.

Devenish were setting the early pace and there was some lovely build up play ahead of John McNulty’s first point.

Chris O’Brien knocked over a free to open a two point gap, but Conal Jones quickly cut it to the minimum with a delightful point from distance.

The first clear cut goal chance of the game fell to Maurice Cassidy on 14 minutes but his weak shot was easily dealt with. Paul Ward fired over an equaliser three minutes later, but it was Devenish who were dictating play.

John O ‘Flanagan opened his account with a free from the edge of the area which was brought up for dissent before a sweet point from Jason Love. Two further frees from the boot of John O’Flanagan gave Devenish a four point cushion a head of the break.

However Ryan Jones served notice just before the interval whistle. He romped through the Devenish rearguard before unleashing a shot just over the bar when there was the slight possibility of a goal on to make it Derrygonnelly 0-4 Devenish 0-7 at the break.

Harps manager Paul Greene read the riot act at half time and he got just the response he desired.

Ryan Jones was provider as Garvan Jones opened the second half scoring. That was rapidly followed by a close range point by Jonathan McGurn to cut the deficit back to the minimum.

Then came arguably the key score of the half. Derrygonnelly won a free close in and the alert Ryan Jones caught Devenish napping and tapped the ball on to Paul Ward who fired home a real poacher’s goal. Derrygonnelly into a lead they would hold for the remainder of the game.

Ryan Jones pointed from the kick out to put a goal in the game, but Devenish weren’t going to go down handy. A free from John O’Flanagan and another beauty from the boot of Jason Love left just a point between the sides.

The key spell for Derrygonnelly was the middle of the second half when they hit 2-4 without reply in a period where they could simply do no wrong.

Jonathan McGurn got things going with a free. Shortly after Paul Ward got the ball out on the left and drove up along the end line before flicking the ball across the face of goals were Jonathan McGurn was waiting to palm home. McGurn then added a superb point from play directly after to put two goals between the sides.

Not long after Paul Ward then took possession 25 metres out and ignoring his options took on his man, making his head spin before burying a beauty in the back of the net. Moments later Ward could have had another goal, but his shot flashed over the bar. When Jonathan McGurn pointed again with a quarter left to play it was all over bar the shouting.

Devenish kept battling nevertheless, John O’Flanagan getting a goal on 48 minutes. He collected the ball knowing that only a three pointer would do and took on the shot, a tricky one across the face of goals, and finished well to Dermot Feeley’s far post.

Derrygonnelly were able to hit on the counter though and points from Garvan and Ryan Jones stemmed Garrison’s momentum.

Devenish kept searching for the scores to get them back in the game and had another goal chance seven minutes from time, but Terry O’Flanagan had to be content with a point. That left three goals between the sides. In the time remaining Marty O’Brien fluffed another goal chance while a late John O’Flanagan attempt on goal from a free went over the bar.

A tough day at the office for Devenish in a game where they actually played some lovely football, but Derrygonnelly will be heartened by the bottle they showed in the second half to secure their place in the final.

The Harps now go in search of a first league title since 2002. They will be underdogs against Roslea, but this display shows they have the guts and the firepower to make the decider a real battle to savour.