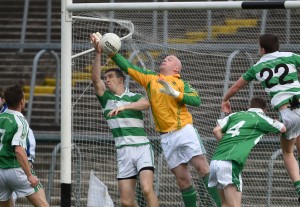 Let’s be brutally honest, that was a pretty dismal spectacle at Brewster Park. The Championship final did not have a lot in the way of attacking quality.

Not that Roslea will mind of course. A fourth title in five years is a brilliant achievement. As James Sherry said in his speech after the game this Roslea team have been making sacrifices for a great many years now. And it shows in their play. Consistent, committed and regimented they are a team to be admired.

It is too easy to explain away the success of Roslea over the past number of years as simply being a product of the brilliance of the Quigley brothers in the full forward line. Yes, they are vital cogs and supreme talents but there is a lot more to Roslea than numbers 14 and 15.

I can’t think of a Roslea player who doesn’t do the basics well, or a Roslea player who takes the wrong option on too many occasions. No, every single player is well practised. And in order to reach that point you need both a desire to learn and a desire to work hard. The fact that after so much success the desire is, if anything, growing is a testament to their ambition.

Against Teemore at the weekend they just had too many good players. I say this even though Teemore will have been delighted with how they handled the twin threat of the Quigley boys in attack. Yes, they scored 2-3 from play between them but by in large they were marshalled well.

Hugh Brady was something of a colossus at full back and his battle with Seamus Quigley was intriguing throughout while Declan McDonald can count himself very unlucky with his own goal at the end.

McDonald did an admirable job on Sean Quigley and while the young sharpshooter escaped his clutches for two moments of brilliance in the second half the Teemore corner back can be proud that he held the Quigley the younger much better than many county defenders have managed over the past number of seasons.

For all Teemore’s success in defence however it was in penetrating the Roslea rearguard that they really struggled. They scored only six times, three frees and a lucky goal from a shot that bounced short were accompanied by two points from play. Those are the bald facts. Roslea paid particular attention to Declan Fitzpatrick in the Teemore attack. The veteran forward had been the real danger man over the earlier rounds and the champions detailed Conor Quigley to pick him up. And with Teemore winning very few breaks throughout the early part of the game it was difficult for them get quality ball inside. Instead they were left trying to counter attack on the occasions when they turned Roslea over and with the exception of Cian McManus Teemore struggled to get enough players coming from deep to create more options in attack. Too often the Teemore inside line were left to try and win long ball against four and five defenders.

Throughout the game, and from both teams, attacking play was quite poor. Out of a total of 4-9 scored between the two teams perhaps only 1-6 came from any sort of coherent attacking plan.

For Roslea their attention will now turn to the Ulster Club where they will meet the Donegal champions. They are likely to be much fresher than whatever side they face due to the delay in the Donegal championship, but they will know that their performance level will have to improve from what they served up on Sunday.

Will persisting with the long ball with every attack work in Ulster? No doubt they have to utilise the brilliance of Sean and Seamus in the full forward line but in their past two championship games they have crossed into the realm of predictability.

A more varied approach would actually create more space for the two boys to shine inside, as the opposition would have attention drawn elsewhere.

Shane Lynch, who I feel is wholly underrated, could be used more while the Cosgrove brothers have the engines and footballing ability to get on the end of scores. Roslea need to vary the long ball with men coming off the shoulder and runs from deep. They have the quality to do it and the quality to do well in Ulster. The time is right for the undoubted kingpins of Fermanagh football to take a big scalp in Ulster.