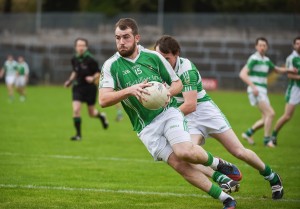 Sean Quigley angles in towards the Teemore goal.

Having banked the championship title Roslea turn their attention to the league and St Patrick’s in the semi-final.

Roslea will be coming into this game on a high with another New York Gold Cup collected, but on the other hand last Sunday’s performance was not especially impressive.

They came close enough towards the final minutes to being overhauled by a dogged Teemore side and another under par display this weekend could mean a difficult 60 minutes.

Still the Shamrocks have to be viewed as favourites here if only on the basis of match fitness.

Ferghal Wray of the St Pat’s management set up readily accepts that.

“Roslea have been the outstanding team in the county over the last four to five seasons and if anyone wants to win anything they have to beat them,” said Wray.

“Everyone is looking for a game plan to handle the threat of the Quigley’s in the full forward line.”

As the result last Sunday shows, the search for that game plan is still a work in progress.

St Patrick’s are in some respects surprise semi finalists.

“You could say this is bonus territory for us,” said Wray. “However we are there on merit thanks to a great run over the final series of games.”

In that series St Patrick’s handed out a heavy defeat to Roslea but the Shamrocks on that occasion had a skeleton side on duty and Wray definitely isn’t reading anything into that victory.

The Donagh side have a couple of injury doubts coming into the game, key forward Pat Cadden and centre back John O’Reilly both not fully fit.
There are quite a number of fresh faces in the St Patrick’s side, but the nucleus remains the experienced core of Eamon and Gary Maguire in attack, Paul Cosgrove in midfield and Pat Grue in defence.

As for Roslea, championship celebrations have been put on hold as they head into this league semi and they will want to keep the impetus going as they look to the really big target, the provincial championship.

Mark Harte readily acknowledged that they had stumbled over the line last Sunday.

But a hard battle had been anticipated against Teemore who come to the championship with a resolute tradition and the fact that it did become a hard fought affair came as no real surprise.

Defensively Roslea continue to be an exceptionally well organised unit.

Teemore managed just six scores and it is hard to see the St Patrick’s attack being able to chisel out a match winning tally.