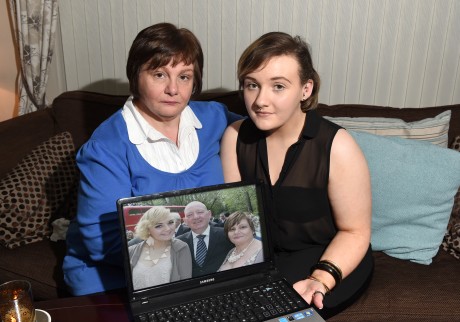 IT WAS Christmas time of 2013 that the first real symptoms began to show for Paul O’Hara.

The 57-year-old former police officer, husband of Margaret and father of Alanna had seen his speech begin to slur, and his left arm became weak.

Unbeknownst at the time, Paul, who lived with his family in Trory, was suffering from the early signs of Motor Neurone Disease (MND).

The disease, which attacks nerves in the brain and spinal cord affects everyone in different ways – and can affect how you walk, talk, eat, drink and breathe.

Paul’s symptoms would become more prevalent as the weeks after Christmas went on, before he was eventually diagnosed. He passed away in August of this year.

His wife, Margaret, reflected on the initial period.

“We noticed at Christmas that his speech was slightly slurred but he was masking that fact, trying to keep it to himself. I think he thought he’d had a slight stroke. And as the month went on we noticed that his left arm was really weak and it left him that he couldn’t button his shirt and he needed assistance to get dressed.”

Margaret and Alanna had, at that point, become aware that the symptoms could be connected to MND- however hadn’t shared their fears with Paul.

He was described as ‘full of life’ before this, and seeing him deteriorate was the most difficult part for the family.

“The doctor tried to explain to him what it was, what the prognosis was – the life expectancy and how we would go forward with treatment.

“Paul couldn’t take it in. One, he didn’t know what motor neurone disease was and two when somebody tells you that your life expectancy goes from what you think could be another 25 – 30 years to three to five years…”

Margaret and Alanna, who took time off school to help care for her dad, described the help of the Motor Neurone Association and health workers as ‘so good’.

As the health of Paul was further deteriorating  – he lost power in his right arm, struggled to swallow, and needed help getting dressed, washing and walking, Margaret and Alanna found themselves becoming closer and closer together.

“It really did bring us together. Alanna stopped school, she was in A Level year, and she wants to do nursing, and she just couldn’t bare to stay at school and for him to be at home with somebody else or with me on my own. She stopped school and was there every day. The caring that she did was unbelievable – you should never have to do what she did for someone, but she coped so well.

“And it has brought us really really close and it has given her a determination. She knows now in her mind what she has to do and what she will have to face sometimes. And it can only help her.”

Reflecting on the impact of the disease, Margaret explained: “Because we faced it everyday and everyday brought its own troubles – we never thought about motor neurone. We didn’t think about it until he passed away; and then you thought ‘What an awful disease’.

Around the beginning of the summer, the ‘ice bucket challenge’ went viral online. The challenge was to raise money and awareness for those suffering from Motor Neurone Disease, something Margaret described as ‘vital’.

“That came during the worst of his illness, that came in July and August. He knew what it was about and we used to say ‘Paul we’re going to do our own ice bucket’ challenge and he would have laughed. We tried to keep the humour in it every day.”

“It’s so important – because only maybe 100 people are diagnosed every year, it’s not like some of the cancer charities – or say Parkinson’s – where there’s a lot known about those diseases. People back away from it because it is such a terrible disease and anything that can raise awareness or raise money for research is so important.”

A NIGHT of music will take place in Charlie’s Bar, Enniskillen, to raise money for the Motor Neurone Disease Association. The Halloween fancy dress ball takes place on Friday, October 31