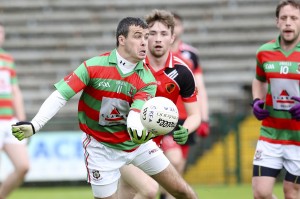 Mark Little prepares to hand-pass as Lisnaskea control the midfield.

Poor Maguiresbridge. Promotion, yes, that’s nice, but it would have just put the cherry on the cake to have some silverware to shake about at the end of the year.

Pipped in the intermediate decider, this was another shot at finishing the season on a high for the St Mary’s men.

However they were minus Conor Hyde, Stephen Reihill, Diarmaid Russell and Colum Rice for this game and that deficit in personnel was to make itself felt as this game wore on.

Of course the fact that this was a derby threw a bit of spice into the mix. Lisnaskea are a formidable outfit in their own right and the real prospect of their near neighbours putting one over on them doubtless warmed the blood nicely. Then there’s Ogie Maguire looking down, the boys knew they had to do him proud too.

And as it turned out ‘Skea finished the first half three points to the good, and were fair value for that advantage having played the more direct football. There was nothing very complicated from either side, but the Emmet’s basics were just that bit more effective.

They set the tone early with Niall McElroy launching over a point in the first minute with Daniel Kille sending over a free, shortly after, That was to be the first of six points from the Emmet’s danger man in the first period.

His second arrived after eight minutes from placed ball with a Matthew Teague free finally getting the ‘Bridge off the mark on ten minutes.
Daniel Kille was on hand to respond a minute later with his first from play and that point was followed by an nice Ryan O’Keefe effort, fired over under pressure to give Maguiresbridge a four point cushion at the end of the first quarter.

Sean Corrigan and Daniel Kille swapped frees before Daniel Teague finally found some space in the Lisnaskea defence to send over Maguiresbridge’s first score from play.

Points from Sean Corrigan and Matthew Teague then narrowed the deficit to a point with four minutes left to play, a decent return given how tough the ‘Bridge had found the first half going.

Lisnaskea finished with a flourish though, Daniel Kille slotting two points. The first came with three minutes left, halting a spell of Maguiresbridge dominance, the second was a free just before the break to send the Emmet’s in a goal to the good.

Maguiresbridge got a positive start to the second half with a magnificent point from the boot of Matthew Teague.

Then ten minutes of scrappy play elapsed before Ryan O’Keefe hoisted over a glorious point. As the game moved into the final quarter Daniel Kille put four between the sides, but things were about to get extremely interesting.

With 12 minutes left Ryan Hyde launched a laser-guided ball in to Matthew Teague. Teague got the shout from Sean Corrigan who collected the ball and buried it in the back of the net.

Then just seconds later Maguiresbridge turned the kick-out, worked the ball to Ryan Hyde, who almost couldn’t believe the space he had, steadied himself and struck for goal.

Tables turned and the ‘Bridge ahead by two with just over ten left to play.

Credit Lisnaskea’s composure though. They held faith with their game plan and Mark Little hit two points within the space of a minute to level the game once more.

A nerveless Daniel Teague shot put the St Mary’s back in the lead with six minutes left and it was starting to look like the red and black might just have the momentum for this one.

And perhaps they might have had, but for a moment of defensive negligence with time nearly up. Niall McElroy collected the ball in the central channel was allowed to just keep travelling towards the Maguiresbridge posts. By the time the danger was clocked it was too late, McElroy flicked the ball on to Ryan O’Keefe who had the simple job of finishing to the net. A minute later O’Keefe landed the coup de grace, a pretty effort from distance.

Then to compound Maguiresbridge’s misery Mark Gavin got the line with a straight red, Noel Davis signalling for a kick.
So yes, promotion secured, but Maguiresbridge’s year ended with two gutting defeats. They will look forward to 2015 surely, but rue the trophies that slipped away this term.

As for Lisnaskea, it’s job done, a tip of the cap to Mr Brian Óg Maguire, and back to the top tier with a spring in their step.