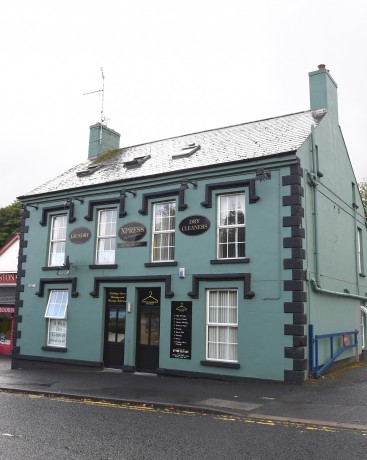 A 22-year-old man who stole £100 from the till of an Enniskillen dry cleaners and then tried to get rid of a T-shirt worn during the raid in a bin, has been found guilty of burglary and theft.

Eamon Michael McDonagh, of Fairview Gardens, Dromore was convicted after contest at Fermanagh Magistrates Court.
Veronica Keogh from Express Dry Cleaners, Forthill Street took the stand and told the court that at around 12.20pm on August 15, 2013 she had been in the launderette section of the premises when she heard the till open.

When she came out to see what was going on she saw McDonagh leaning over the counter with his hand in the £20 drawer of the till. She then chased McDonagh out of the premises and followed him up the entrance way of the Enniskillen Hotel.

McDonagh and another male then made their way up into the car park area and into Forthill Park.

The woman then went into the hotel and rang police. £100 was taken from the till.

CCTV footage showed the two males running in the direction of the Enniskillen Hotel being pursued by Mrs Keogh and through this footage and the description given from the injured party police were able to identify McDonagh.

During an identity procedure the woman identified McDonagh as the thief.

Under cross-examination defence barrister Dessie Hutton questioned whether or not the woman ever got a clear view of the man involved in the theft, stating she had just seen the top of his head. “I saw his face,” she replied.

He also questioned her description of the male as “very tall” when he was 5ft 9 in height.

Constable Haire was next to take the stand and he explained that he attended the Enniskillen Hotel at 1pm on the day in question and viewed CCTV footage from which he identified McDonagh.

A short while later in the day he and another officer attended the Social Services building on the Queen Elizabeth Road, where they saw the other male from the CCTV footage.

Constable Haire explained that he noticed then McDonagh coming out of the disabled toilets, with a jacket on without a t-shirt. He was arrested on suspicion of burglary.

The constable then recovered a blue t-shirt believed to be the same one used in the robbery and caught on CCTV footage minutes earlier, from the bin in the toilet.

This evidence, along with the defendant’s jacket was shown in court.

The defence barrister highlighted to the court that only £25 was found on McDonagh, not the £100 stolen from the till.

He also stated that the defendant claimed he had not been wearing a t-shirt and had been in town to buy a t-shirt.

District judge Nigel Broderick said he found Constable Haire to be a truthful witness and was satisfied he did view the CCTV at the hotel. He also was satisfied that McDonagh had been wearing a t-shirt underneath his jacket.

In making his judgement Mr Broderick took into account the fact McDonagh chose not to give evidence in court and questioned his evidence given during interview.

“The defendant initially said his mother had dropped him into town around 12.45 and put forward his mother as an alibi, but officers spoke to the mother who said she dropped her son in around 11am and she did not want to make a statement.”

He recognised there was no DNA on the till, but said in his opinion McDonagh had put the t-shirt in the bin.

The judge adjourned sentencing for four weeks until October 27 to allow the preparation of a pre-sentence report.