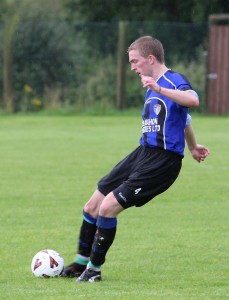 NFC Kesh’s wait for their first points in division one goes on after losing 4-2 at home to Tummery Athletic on Saturday afternoon. It was another disappointing afternoon for the hosts with Callum Funston unfortunately suffering a leg break.

The incident occurred five minutes into the second half when he went in for a fifty fifty challenge and play was held up for three quarters of an hour as he was taken to hospital in an ambulance. Kesh manager Niall Amos was naturally distraught with the news.

“It was very unfortunate for Callum as not only did he break his leg but he snapped ligaments as well and that is likely to be the end of his season,” admits Niall.

“Performance wide it was the same again as we made too many silly mistakes and were punished for them. We just get buy a win at the minute while last year we couldn’t lose but that’s the way football goes. We will just keep plugging away and hopefully the results will come for us.”

It was the Tyrone men who opened the scoring after ten minutes when poor defending from a corner allowed Gerry McCullagh to tap in from close range past keeper Gavin Reid.

Five minutes later and it was 2-0 when good approach play from Declan McNulty on the left wing saw him cross for Ryan Cunningham to head home. Midway through the half Lee Walker was unlucky not to pull one back when his rasping shot hit the bar but five minutes later he did score. Tummery Athletic though wasted no time in restoring their two goal cushion when Declan Molloy flicked on a corner for McCullagh to grab his second of the game to leave it 3-1 at the break.

The unfortunate leg break occurred happened in the early moments of the second period and when play resumed NFC Kesh were caught napping and Cunningham fired in a rising shot from an acute angle.

With a quarter of an hour left to play Nicky Allen’s neat finish pulled one back for the home side but despite Mark Jones, Walker and substitute Nicky Noble all having chances after that it finished 4-2.