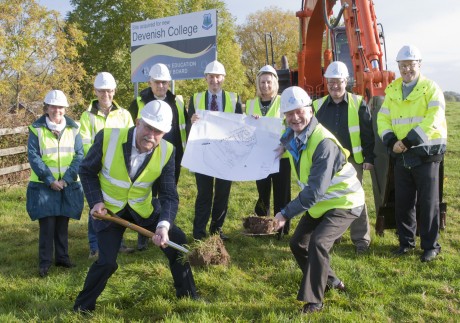 AT LAST… Chairman of the Board of Governors for Devenish College Alex Baird and school principal Mervyn Walker turn the first sods on the site for the new school on the Tempo road. Looking on are Carol Trimble, William Magee, David Skuce, Chief Architect Peadar Murphy holding the plans with Iris Barker head of property services, Neville Armstrong and Brian Harper

THE FIRST SOD has been cut at the site for the new Devenish College, more than 10 years on from when it was first being promised a new build.

On Friday school principal Mervyn Walker along with members of the school’s Board of Governors’ joined Western Education and Library Board officials  and contractors from Woodvale construction to cut the first sod and mark the beginning of enabling works at the Tempo Road site in Enniskillen.

Although the school is still waiting for the economic appraisal to be backed by the Department of Education, minister John O’Dowd, as recently as September 22, 2014, re-affirmed his commitment to a new build at Devenish College.

Enabling works began this week at the site, with Woodvale Construction the contractors.

Phase one of the works will provide an entrance road, site compound and enabling works in advance of the culverting works and removal of a drumlin.

Speaking at the site on Friday chairman of the board of governors Alex Baird admitted his delight at finally being able to see progress on the new school.

“It is certainly a relief and a  great feeling the way things are going forward. Obviously this is the starting point of the build. We have waited for over ten years, we were promised occupancy by 2008. Circumstances changed, government policy changed and public-private partnerships, there was a challenge to European ruling. We are where we are now and this is the start of the enabling work for the school to be built and we look forward to its occupancy.”

He continued:  “The minister has committed to building a Devenish College and this is the start of it. Yes the economic appraisal has to be decided upon and hopefully that will be done very soon.

“It’s in the Minister’s bailiwick, it’s up to him to make the decision. I have no insight into when, but I would hope it would be sooner rather than later.”

Principal Mervyn Walker said he was always confident they would get to this point, but admitted it was a pity it had taken so long.

“I’m delighted for the pupils, the staff and for the parents and particularly the governors who have worked so hard to get it to this stage and we just now hope that things proceed at a pace that’s appropriate and we‘ll end up soon in our new school.”

He told the Herald the new school will offer state-of-the-art education in the controlled sector.

“They can expect first of all, first class facilities and everything closely located to the playing fields.”

Mr Baird added: “It will be the most modern school in Fermanagh when it’s built and is long overdue for the controlled sector in Fermanagh.”

When asked if there were fears this latest development could be another false dawn and the school may face further delays, the chairman said stressed: “The Minister has given a commitment and we will hold him to it.”