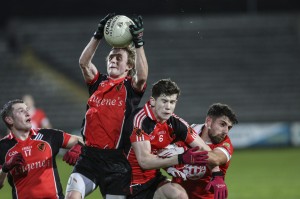 Ciaran Corrigan is part of a multi-faceted Maguiresbridge strikeforce

A unique pairing for Sunday’s SFL Division 2B final as the closest of neighbours Lisnaskea and Maguiresbridge contest a decider which will have that extra edge to it.

This is the third meeting of the teams this season under the new divisional format, the record standing at two wins for the Emmett’s, one for the ‘Bridge.

This final will be steeped in parish rivalry and both camps will be resolutely determined to end the year with the bragging rights.
Lisnaskea have enjoyed the higher profile over the years, but the ‘Bridge have been an emerging force on the Fermanagh club scene and past history will count for little when this tussle gets underway.

Despite the disappointment of defeat in the intermediate championship final Maguiresbridge still have a lot to celebrate with promotion to SFL Division One for 2015.

Manager Colm Courtney candidly admitted that his panel were, “Simply gutted by the championship defeat. Since that we have been taking things fairly low key.

“In any case quite a number of the squad have been involved with preparation for the provincial club hurling fixture against Portaferry,” said Courtney.

“It has focussed attention elsewhere for the boys who are involved in hurling and hopefully when they have come back into the football camp they will have been able to put that intermediate disappointment behind them.”

The prize of promotion has been secured Courtney and his squad will be exceptionally keen to finish what has been a momentous season on the appropriate high.

“It would be great to finish the year with a trophy,” said Courtney.

He does have some injury problems to contend with Stephen Reihill and Diarmaid Russell both ruled out and a hamstring pull in the intermediate decider looks like it will also rule out Conor Hyde.

As for Lisnaskea while they look to have a clean bill of health their manager Tony Collins has had his own problem to cope with.

“We have not had a competitive game for something in the region of two months and obviously it has been difficult to keep things ticking over,” he stated.

“Maguiresbridge will clearly have an edge on us in the matter of match fitness. But I expect all that will be forgotten about once the ball is thrown in.”

The Emmett’s might lead the current series by two to one but Collins is not reading anything into that.

“Maguiresbridge have impressed me by their attitude this season and they are a side hungry for success,” said Collins.

“Certainly they will be disappointed by their championship defeat, but they will have been boosted by winning promotion and we will be treating them with the utmost respect. In any case the games we have had with them this season have all been close and I fully expect this final to be the same.”

Key factor in how the game may shape up could centre on the duel between the ‘Bridge attack and the Emmett’s defence.

The former have the three Teague brothers, Matthew, David and Daniel as a dangerous spearhead and they will pose a major headache for the
Emmett’s defence which is linchpinned by experienced Mark McKenna and John Woods.

Up at the other end  of the park Lisnaskea will be looking to a rejuvenated Daniel Kille to be at the hub of their attack with nimble support coming from Mark Little and former county minor Sean Keenan.

Two well matched sides, this evident from the track record for the season and with the fiery spice of a derby battle added to the mix this second division league decider could well be one of the most hard fought games of the domestic season.