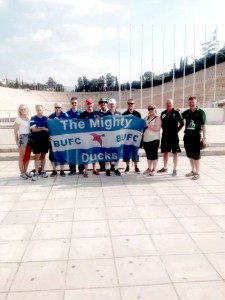 IT’S been three wins out of three for Northern Ireland in their European Championship campaign – a result that not many would have predicted.

Robbie Walker has been among a contingent of local fans who travelled to the games – including the jaunt to Greece.

“I’ve only really started going on the away trips since the World Cup campaign but it’s really my involvement with a lot of the Fermanagh guys part of the squad,” he explained.

“Roy Carroll is a true professional playing goals – that’s always a good start for a possible one nil with Roy’s experience and professionalism.

“Obviously Kyle Lafferty is sitting on 12 goals, he needs one more to be the next goal scorer to David Healy – so he’ll get that accolade.

“We mustn’t forget Michael McGovern who has had five or six clean sheets in the Scottish premiership and he’s waiting for his opportunity. There’s always a good deputy there

“It’s a wee bit disappointing for another local guy, Andy Little who seems to be getting injured at the wrong time. He’s played t different levels for Northern Ireland and as part of the senior squad.

But what was he expecting?

“For this campaign I thought we would have found it more difficult. If I was in Michael O’Neill’s shoes at the moment I’d be over the moon.

“If we keep getting the odd draw away from home, and win our home games, we’re there.

“It’d be great to win the group, but if we finish second it’d be great,” said Walker.

Northern Ireland defend their Group F table-topping status against Romania in Bucharest next on November 14.