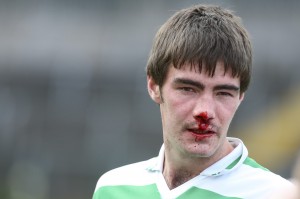 Battered and Bloodied, Patrick McManus, bled to ensure Teemore made it to the championship final

In the heyday of Enniskillen’s championship dominance, the all-powerful Gaels were to sweep the rest of the clubs aside with a remarkable six successive victories.

Midway through that sequence with no sign of Enniskillen’s monopoly being interrupted, pre final media previews all followed a familiar tread.

More or less everyone predicted another title for the holders, but everyone threw in the caveat that the opposition couldn’t be totally written off.
For in the heel of the hunt, to use that oldest of championship clichés, it’s all on the day.

As we head towards this weekend’s county decider we are back on familiar territory, but instead of Enniskillen we have Roslea holding the position of a team dominating the local scene.

Roslea are featuring in their fourth final in the space of five seasons and but for an unexpected blip back in 2012 could be heading for five-in-a-row.

That blip denied them the always notable hat trick but no doubt they will be exceptionally keen to have that on their CV before the powers of their present squad begin to wane.

Canvassing neutral opinion over recent days has seen the predictable assessment with everyone of the view that Roslea were going to come out on top.

The current champions are simply too well equipped in so many facets that it’s a long shot to suggest that Teemore would be able to stage what would be an astonishing upset.

And this despite the fact that the Mountain Road side are a club with an exceptional championship tradition of their own.

Teemore who have been relegated from the top division will not let that fate undermine them.

This is championship, a different kettle of fish all together and they come into this game with a full blooded belief that they can take Roslea.

And they will have inspiration to fuel that belief. Back in 1983 the two clubs met in similar circumstances.

Roslea were to be the team of the early to mid 80s, far and away the best side in the county, they were to finish that era with no less than six successive league titles.

But on that never to be forgotten day in Lisnaskea they had their championship aspirations dramatically dismissed by an opposing Teemore who came into the final as rank outsiders.

And Roslea despite all their authority in the league both in those halcyon days of the 80s and now in the more recent era, do have a vulnerability in the knock out arena.

Of course on paper Roslea look to hold a very strong hand and it will be a huge surprise if they were to be beaten.

But they have to deliver and as we have already seen down in Croke Park back in August there is no such thing as a sure thing in sport.

A Dublin team that was in the region of six to seven on to win was beaten out the gate.

At the end of it all this is a two horse race and Roslea have to be aware of the pedigree of the side challenging them on Sunday afternoon.