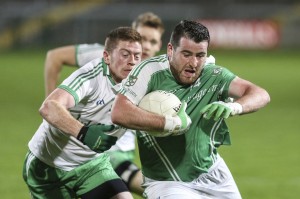 Teemore face a huge test when they take on Roslea this Sunday. In the battle of the Shamrocks it has to be the Roslea men who are considered the warmest of favourites.

It used to be said by managers in years gone by that, ‘We won’t worry too much about the opposition,’ and that, ‘We will concentrate on our own game and our own strengths.’

There has to be a major emphasis placed on your opponents. And that emphasis needs to be placed not only on their weaknesses, but more importantly on their strengths.

In this regard Teemore will have plenty of thinking to do before Sunday. No doubt a large portion of their game plan will be centred around stopping Seamus Quigley and they will have taken heart from the fact that Marty McGrath was successful in largely dampening Quigley’s influence in the semi-final.

I say largely because big Seamie had the intelligence to extricate himself from the full forward line thus bringing McGrath with him and leaving brother Sean with more space inside. It was Seamie who won the break around the middle that eventually led to Sean’s goal. So, Teemore have a choice to make regarding Hugh Brady, who will no doubt start at full back.

Will he follow Seamie if he drifts out or hold back and mind the house? Decisions, decisions.

But dealing with the twin Quigley threat – and I consider Sean to be a more important player for Roslea – is only the tip of the iceberg. The quandary of stopping James Sherry winning enough ball is one that has to be figured out while attention will have to be also paid to Shane Lynch, the Cosgrove brothers and Shane McMahon who continue to have their influence underestimated by teams.

Looking through the Roslea team they have no weak links. They are all what can be called ‘proper players’. Reading to this point one might wonder why I think Teemore should even bother to turn up. Well, if the recent few weeks and the All-Ireland series has shown us anything it is that good tactics and a sound game plan deployed by players who know their roles can do wonders against even the hottest of favourites.
And to add to this, from a purely managerial point of view, it will be much more difficult for Roslea to figure out Teemore.

Yes, they have players such as Declan Fitzpatrick who have shown great form to date in the championship but they have plenty of players who have a whole lot more in the tank. Eoin McManus and Cian McManus are two massive players for Teemore and they will take some serious watching if firing on all cylinders. And we have not even started to speak about the qualities of Joey Donegan, Declan O’Reilly and Barry Owens. Teemore are something of an enigma who’s performance can swing from very poor to a very good. When they produce their best they are a whole greater than the sum of their parts.

Teemore will need to summon up their best performance for a number of years if they are to beat Roslea. People are quite correctly making this a David versus Goliath contest but it will be fascinating to see how David goes about sizing up the giant.

They will need more than a slingshot and a rock to get the job done though.

ROUTES TO THE FINAL