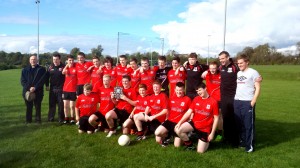 The Brookeborough squad that won the U16 Division Two league title

The outcome of this decider hung in the balance right to the final seconds right into almost five minutes of added time, with Brookeboro finally just squeezing out the win with a dramatic late point from play by Seamus Moane.

The game was tightly contested all the way, Brookeboro just scraping into a two points interval lead. It was much the same pattern over the third quarter before a 50th minute goal from Martin Conwell gave Brookeboro some extra breathing space.

But they found themselves then having to fend off a determined St Patrick’s rally which eventually had the teams back on level terms as the game swung into added time.

For Brookeboro corner back James McQuaid was to deliver an steady display and in their half back line both Andrew Boyd and Seamus Moane impressed with Conor Goodwin featuring brightly in the middle third of the park.

Brookeboro made a sprightly enough start to the game collecting a goal from Niall Wray, the first score of the hour and on 15 minutes they had a second, Conor Goodwin rising highest close in on goal to flick home a punt from outfield.

They were also to shoot five points, Conor Goodwin with a couple, Martin Conwell and Matt Nelson also on target.

But they were never to be in comfort zone as opponents St Patrick’s were enjoying good spells in reply.

Paul Og O’Reilly shot their first point early on and he was to be a thorn in Brookeboro’s side for the rest of the half as he snapped up two goals, the  first on 15 minutes the second arriving shortly before the break.

St Patrick’s failed to strike from an early second half penalty award but in virtually their next attack Eoghan Curran was to shoot a goal and set the game up for a taut finish. Curran, who was to emerge as one of the key St Patrick’s players from his midfield base, was to grab a second goal but this was cancelled out by Conwell’s effort.

Brookeboro now looked to have the matter sewn up but St Patrick’s launched a spirited late challenge that finally pulled the sides level.

Moane then popped Brookeboro back into the slimmest of leads while St Patrick’s failed to nail a late chance to tie the match.