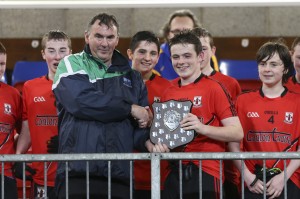 Brookeboro cruised to victory in the under 16 B championship final over an outclassed Enniskillen Gaels ‘B’ team.

Brookeboro had the game sealed up from very early on and in truth it was a case of shooting practice for the Heber McMahon’s against a Gaels side who manfully tried to halt the one way traffic but simply could not stem the Brookeboro flow.

For the winners Shane McAloon at centre half back and Seamus Moane on the wing were dominant figures in a defence that was always on top while Stuart Boyd and Conor Goodwin were a driving force at the middle of the field.

Scoring 27 times over the course of the hour Brookeboro really caught the eye going forward. Stuart Boyd bagged a brace of goals with brother Andrew Boyd also nabbing two goals. Other goals were provided by Conor Goodwin, Marty Conwell, Aaron Foy and Rory Greene.
Even though they were outgunned by the winners the Gaels tried hard throughout.

Fionn Hamill in goals performed heroically and the score could have been much more but for his efforts while just ahead of him Ciaran Fee in defence was certainly a player who carried the fight to the winners for the whole hour. Callum Jones and Kieran Fee also worked hard for the losers with Conor Rippey showing some nice touches in attack.

In truth Brookeboro have been a cut above the other teams in the B championship this year, as shown by their division two league win.
This group of players have improved markedly since losing out to Teemore in the division three under 14 final two years ago, a testament to the work Brookeboro have been putting in on the training field.